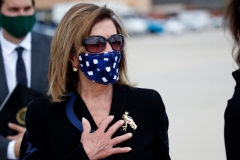 (CNSNews.com) -  House Speaker Nancy Pelosi (D-Calif.) visiting a hair salon in San Francisco on Monday when everyone else in the city was not allowed to is “the ultimate hypocrisy,” White House Deputy Press Secretary Brian Morgenstern said Wednesday.

“The ultimate hypocrisy for someone to be out lecturing the American people about how we need to shut down our country and you can't do business and you have to always be socially distanced and wearing a mask,” Morgenstern told Fox News’ “America’s Newsroom.”

“Look, the president is encouraging people to be careful, take common sense precautions, wear a mask if you can't distance and wash your hands, do all of these things. I think it’s the hypocrisy that is really offensive to people. She got caught red-handed. The people know that people who say one thing and do another probably shouldn't be trusted too much,” he said.

President Donald Trump reacted to Pelosi’s salon visit, tweeting, “The Beauty Parlor owner must really dislike Crazy Nancy Pelosi. Turning her in, on tape, is a really big deal. She probably treats him like she treats everyone else...And she strongly supported a Kennedy who just lost in, of all places, Massachusetts!”

Meanwhile, Morgenstern accused former Vice President Joe Biden of being motivated by politics for deciding to finally leave his home in Delaware and visit Kenosha, Wis., on Thursday with his wife.

On Tuesday, Trump visited Kenosha - where people have been protesting and eventually rioting in the wake of the Jacob Blake shooting by police.

Morgenstern said Biden’s visit is “too little too late.”

“It is unfortunate that violence and rioting and the president, President Trump taking that seriously is finally what will get a Democratic presidential candidate to visit the people of Wisconsin. It is sad that that's what it takes. We're glad the Democrats are finally taking it seriously. It's just that President Trump has been speaking about this for months,” the deputy press secretary said.

“He has been talking about federal support to restore safety in the streets that he is standing up for people who want their communities to be secure so they can go about their day and so they can run their businesses,” he said.

"The fact that Joe Biden is now months later finally acknowledging it after their entire convention ignored it and after the president visited this city to highlight the damage done and to highlight the federal support, finally now the vice president Biden will visit,” Morgenstern said.

“It is unfortunate that politics seems to be the motivating factor for them as opposed to President Trump, who is just trying to help citizens secure their communities and restore safety in the streets,” he added.