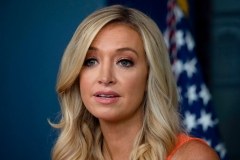 (CNSNews.com) – The DOJ has arrested over 100 people for rioting and destroying property, and the FBI has over 200 domestic terrorism investigations underway, White House Press Secretary Kayleigh McEnany said Monday.

“Law and order are the building blocks to the American Dream, but if anarchy prevails, this dream comes crumbling down.  Anarchy in our streets is unacceptable, and anger is not enough. You have a president committed to action. The DOJ has arrested over 100 anarchists for rioting and destruction of federal property,” she said at Monday’s White House press briefing.

“The DOJ has also charged four men in federal court for attempting to tear down the statue of Andrew Jackson in Lafayette Square. The FBI has over 200 open domestic terrorism investigations ongoing. AG Barr has created a task force on violent anti-government extremists led by the U.S. Attorney's Office in New Jersey and the U.S. Attorney's Office in Northern Texas,” McEnany said.

“With 200 Trump-appointed judges confirmed, the rule of law will be upheld. Democrats at all levels -- federal, state, and local -- have done nothing.  Senate Democrats blocked bipartisan police reform. Minnesota's Democrat governor failed to urgently deploy the National Guard. It took President Trump for that to eventually happen - his suggestion -- and the ultimate descendance into chaos there in Minneapolis,” she said.

As CNSNews.com reported, the press secretary pointed out that three Minneapolis City councilmembers who voted to abolish the police department have private security paid for by the taxpayers.

“Three Democrat Minneapolis councilmembers voted to abolish the police, while they themselves were getting a private security detail. That's quite rich,” McEnany said.

“Democrat mayor of Seattle called the CHOP zone -- the autonomous zone – ‘the summer of love.’ It is anything but that with one dead, multiple shootings, and desperate pleas for help unanswered by business owners and others,” the press secretary said.

McEnany accused blamed the destruction of statues on Democratic leadership.

“Let's be clear: The rampant destruction of statues is not a part of any ideology, but this anarchy is aided by failed Democrat leadership, and as President Trump has tweeted, these statues, ‘are great works of art, but all represent our History and Heritage, both the good and the bad.  It is important for us to understand and remember, even in turbulent and difficult times, and to learn from them,” she said.

“So let's stand for law and order, for peace in our streets, and against anarchy. This is President Trump's vision for the future,” the press secretary said.