WH on McCarthy’s Invitation for Biden to Visit the Border: ‘He’s Been to the Border’ 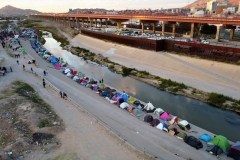 (CNSNews.com) - House Minority Leader Kevin McCarthy (R-Calif.) invited President Biden to visit the southwestern border with him, but it’s an invitation that the president is not likely to take him up on, according to the White House.

White House Press Secretary Karine Jean-Pierre said that Biden has already been to the border, and she blamed Republicans for not being willing to work on “fixing a situation that’s been around for decades now.”

She said that more than 23,000 Border Patrol agents are working to secure the border, and the administration is cutting down on asylum processing times.

JEAN-PIERRE: So look. He’s been there. He’s been to the border, and since he took office—

DOOCY: When did he go to the border?

JEAN-PIERRE: Since he took office, President Biden has been taking action to fix our immigration system and secure our border, and that’s why on day one he put forward an immigration reform piece of legislation to deal with what is currently happening at the border, but you know, we’re not seeing that from Republicans. We’re not seeing a willingness to work with us on fixing a situation that’s been around for decades now.

Instead, they’re doing political stunts. That’s what they want to do. That’s how they want to take care of the situation, but in the meantime, the president has secured record levels of funding from the Department of Homeland Security. We have over 23,000 agents working to secure the border.

We’ve taken thousands of smugglers off the streets, and we’re cutting down on asylum processing times, and a number of individuals arriving unlawfully from northern Central America and Venezuela is coming down significantly because of the actions that the president has taken.