WH: DHS Disinformation Board Paused for Assessment, But Work Will Continue 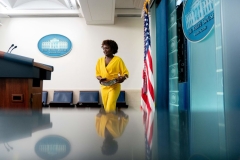 White House Press Secretary Karine Jean-Pierre arrives for the daily briefing in the Brady Briefing Room of the White House in Washington, DC, on May 18, 2022. (Photo by STEFANI REYNOLDS/AFP via Getty Images)

(CNSNews.com) - White House Press Secretary Karine Jean-Pierre said Wednesday that DHS is pausing its Disinformation Governance Board so that there can be an “assessment” by former DHS Secretary Michael Chertoff and former Deputy Attorney General Jamie Gorelick, but “DHS is still going to continue the work.”

“DHS said today that they’ll be pausing the Disinformation Governance Board. Did the White House play a role at all in perhaps expressing frustration in how it was rolled out or express any involvement in how, whether or not it should be paused, and then also some experts have said that it was set up to fail the way it was rolled out. Do you have a response to that?” a reporter asked.

“So the board has never convened,” the press secretary said.

“It never convened, and the board is, yes, the board is pausing in the sense that it will not convene while former Secretary Chertoff and former Deputy AG Gorelick do their assessment, but the department’s work across several administrations to address disinformation that threatens the security of our country is critical, and that will indeed continue, and neither Nina Jankowicz or the board have anything to do with the censorship or with removing content from anywhere,” she said.

“Their role is to ensure that national security officials are updated on how misinformation is affecting the threat environment. She has strong credentials and a history of calling out misinformation from both the left and the right, and that’s our focus,” Jean-Pierre added.

When asked whether the White House played a role in whether the board should be paused or what should happen with the board, Jean-Pierre said, “No, at first, well like I said, this is what’s happening. There is a pause. We did not have an involvement in this at all.”

Fox News White House Correspondent Peter Doocy asked, “Follow-up to the disinformation board, last week, you guys said that you needed this Disinformation Governance Board at DHS to make sure that freedom of speech is protected across the country and that these platforms are not used for forums of information. So what changed?”

“Look, the Department of Homeland Security, they began their statement repeating that the board had been intentionally mischaracterized, which is a little bit of what you were asking me, and they were explicit about what it does and does not do,” Jean-Pierre said.

“It was never about censorship, policing speech, or removing content from anywhere. Its function was to keep homeland security officials aware of how bad actors, including human smugglers, transnational criminal organizations and foreign adversaries could use disinformation to advance their goals,” she said.

“As Secretary Mayorkas said, he has asked former DHS Secretary Michael Chernoff and former DAG Jamie Gorelick to lead a thorough review. This is the pause that I was talking about, an assessment as members of the bipartisan security council advisory council,” the press secretary said.

“The board will not convene during that period. The department’s work across several administrations to address disinformation that threatens the security for our country is critical and will continue, so that work will continue,” Jean-Pierre said.

“So pausing because you think the board was mischaracterized, then the disinformation board is being shut down because of disinformation? Is that what’s happening here?” Doocy asked.

“Look, the board was put forth for a purpose, right, to make sure that we really did address what was happening across the country when it came to disinformation. It’s going to pause,” Jean-Pierre said.