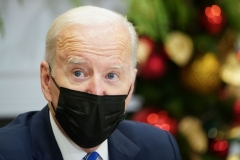 President Joe Biden speaks during a meeting with the White House COVID-19 Response Team in the Roosevelt Room of the White House in Washington, DC on December 16, 2021. (Photo by MANDEL NGAN/AFP via Getty Images)

(CNSNews.com) - A mid-level staff member who tested positive Monday for COVID-19 spent “30 minutes in proximity” with President Biden on board Air Force One on Friday, the White House announced on Tuesday.

According to a statement from White House Press Secretary Jen Psaki, that staff member is “fully vaccinated and boosted, and tested negative prior to boarding Air Force One, as is required for everyone traveling with the President.”

The staff member did not begin to experience symptoms until Sunday, and was tested on Monday.

“As CDC guidance does not require fully vaccinated people to quarantine after an exposure, the President will continue with his daily schedule,” the press secretary added.

Psaki told reporters on Tuesday that the president is “asymptomatic,” and she spent “several hours” with him Tuesday morning. “He is feeling great,” she said.

“And what are the procedures that would go into place if the President did, in fact, test positive for COVID?” a reporter asked.

“Would he stay at the White House? Would he go to Walter Reed? Or is that still undecided?” the reporter asked.

“I don’t have any predictions of that,” Psaki said. “I think it depends on whether he would be symptomatic or not, but let’s hope that’s not a challenge we will be facing.”

When asked whether the staffer tested positive for the Omicron variant, the press secretary said she doesn’t have “any additional information.”