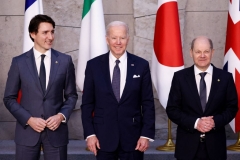 Trudeau’s liberal government introduced legislation on Monday that would put a freeze on importing, buying, and selling handguns. That along with expanding the country’s red flag law would result in the toughest gun restrictions that Canada has seen in 40 years.

The only exception would be for relevant businesses and for people with a handgun license who can prove that they need it for protection or for their profession.

“So we’ll leave it up to other countries to set their policy on gun ownership,” the press secretary said.

“The president has made his position clear. The United States needs to act, as I just laid out. He supports a ban on sale of assault weapons and high-capacity magazines and expanded background checks to keep guns out of the dangerous hands. He does not support a ban on the sale of all handguns to answer your question,” she added.