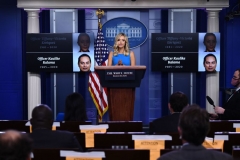 White House Press Secretary Kayleigh McEnany speaks to the press on June 3, 2020, while displaying images of Honolulu Police Officers, who died in the line of duty, during a daily press briefing in the Brady Briefing Room of the White House in Washington, DC. (Photo by BRENDAN SMIALOWSKI/AFP via Getty Images)

(CNSNews.com) – White House Press Secretary Kayleigh McEnany said Wednesday that the 1st Amendment gives people the right to peacefully assemble, but it does not give the right to riot, loot, burn buildings, deface property, or assault citizens or police officers.

McEnany pointed to the March on Washington in 1963 as “the greatest example” of a peaceful protest, and she pointed to the words of Dr. Martin Luther King, Jr., in his “I Have a Dream Speech” when he discouraged physical violence.

“The First Amendment, however, does give you the right to peaceably assemble, and the greatest example that we have seen of peaceful protest, an absolute embodiment of the First Amendment, is the March on Washington,” the press secretary said.

“On August 28, 1963, a quarter of a million Americans gathered at the Lincoln Memorial and peacefully made a powerful march and a powerful point: that all Americans should be treated equally; that racial discrimination was unacceptable, abhorrent, and that it needed to be rectified,” she added.

“And in the famous ‘I Have a Dream’ speech by Reverend Dr. Martin Luther King, he said this: ‘We must not allow our creative protest to degenerate into physical violence. Again and again, we must rise to the majestic heights of meeting physical force with soul force,’” McEnany said.

“And soul force is exactly what Dr. Martin Luther King Jr. met the nation with when he said this: ‘I have a dream that my four little children will one day live in a nation where they will not be judged by the color of their skin but by the content of their character.’ Important words, important actions from an American hero who contributed to making this nation the greatest on Earth,” the press secretary said.

“With that in mind, we must remember to recognize the lives lost, the passing of George Floyd who was killed unjustly -- in a horrific video that we all have seen, and we must also remember the passing of police captain David Dorn yesterday, who was shot and killed by looters in St. Louis, in an absolute tragedy.  A retired officer, 77 years old, whose wife was also a police officer herself.  Dorn was a hero and an unfortunate casualty in the riots we have seen.  Our hearts are with his family,” she said.