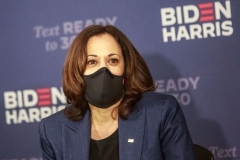 During the ABC vice presidential debate, instead of answering a question by moderator Susan Page on how the Trump administration will protect Americans with pre-existing conditions if Obamacare is struck down, Pence asked Harris, “I think the American people would really like to know if Judge Amy Coney Barrett is confirmed to the Supreme Court of the United States, are you and Joe Biden, if somehow you win this election, going to pack the Supreme Court to get your way?”

Instead of answering, Harris gave Pence what she called “a little history lesson” on how former President Abe Lincoln wanted a Supreme Court vacancy, which came about a month before the presidential election, to be filled after the election, even though his party -- the Republican Party -- was in charge of the Senate.

Pence said that voters deserved to know whether Biden and Harris would pack the court, so Harris responded by pointing out that out of all Trump’s judicial nominees for the high court and lower courts, none of them was black.

Here is a transcript of the exchange:

PENCE: Well, thank you, Susan, but let me just say, addressing your very first question, I couldn't be more proud to serve as vice president to a president who stands without apology for the sanctity of human life. I'm pro-life. I don't apologize for it, and this is another one of those cases where there's such a dramatic contrast. Joe Biden and Kamala Harris support taxpayer funding of abortion all the way up to the moment of birth -- late-term abortion. They want to increase funding to Planned Parenthood of America.

Now, for our part, I would never presume how Judge Amy Coney Barrett would rule on the Supreme Court of the United States, but we'll continue to stand strong for the right to life. When you speak about the Supreme Court, though, I think the American people really deserve an answer, senator Harris. Are you and Joe Biden going to pack the court if Judge Amy Coney Barrett is confirmed? There’ve been 29 vacancies on the supreme court during presidential election years from George Washington to Barack Obama.

Presidents have nominated in all 29 cases, but your party is actually openly advocating adding seats to the Supreme Court, which has had nine seats for 150 years, if you don't get your way. This is a classic case of, if you can't win by the rules, you are going to change the rules. Now, you’ve refused to answer the question, Joe Biden has refused to answer the question. So, I think the American people would really like to know if Judge Amy Coney Barrett is confirmed to the Supreme Court of the United States, are you and Joe Biden, if somehow you win this election, going to pack the Supreme Court to get your way?

HARRIS: I'm so glad we went through a little history lesson. Let's do that a little more. In 1864 --

PENCE: The people are voting right now. They’d like to know if you and Joe Biden are going to pack the Supreme Court if you don't get your way in this nomination.

PENCE: The American people deserve a straight answer. If you haven't figured it out, they are going to pack the Supreme Court if they somehow win this election. Men and women, I gotta tell you, people across this country, if you cherish our Supreme Court, if you cherish the separation of powers, you need to reject the Biden/Harris ticket. Come November the 3rd, re-elect President Donald Trump, and we'll stand by the separation of powers in a nine-seat Supreme Court.

HARRIS: Yeah, I'm about to. So the Trump/Pence administration has been, because I sit on the Senate Judiciary Committee, Susan, as you mentioned, and I have witnessed the appointments for lifetime appointments to the federal courts, district courts, courts of appeal, people who are purely ideological, people who have been reviewed by legal professional organizations and found to have been not competent, are substandard, and do you know that of the 50 people who President Trump appointed to the court of appeals for lifetime appointments, not one is black? This is what they've been doing. You want to talk about packing a court? Let's have that discussion.

PAGE: Thank you, Senator. Let's go on and talk about the issue of racial justice.