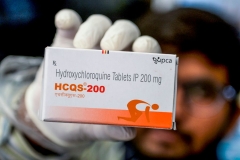 This photo taken on April 28, 2020 shows a pharmacist displaying a box of hydroxychloroquine (HCQ) tablets in his store in Hyderabad. - India has ramped up output of an anti-malarial drug hailed by US President Donald Trump as a "game-changer" in the fight against coronavirus, even as its pharmaceutical industry struggles to make other key medicines in a lockdown. (Photo by NOAH SEELAM/AFP via Getty Images)

(CNSNews.com) - VA Secretary Robert Wilkie said Tuesday that the Defense Department and the VA have been using the drug hydroxychloroquine for decades, and on any given day, the VA uses 42,000 doses of the drug.

During a White House cabinet meeting, Wilkie disputed the depiction of a study published last month of the anti-malaria drug which President Donald Trump has touted as a possible treatment for COVID-19.

“I want to clear up something that the media has not reported accurately. That was not a VA study,” Wilkie said.

The secretary’s comments come one day after Trump announced that he has been taking the drug under a doctor’s supervision.

“Researchers took VA numbers, and they did not clinically review them. They were not peer-reviewed. They did not even look at what the president just mentioned. The various co-morbidities that the patients who were referenced in that study had. I also want to echo what the secretary of HHS said,” said Wilkie.

“The instructions I received from the president were very clear. That was to preserve and protect life. Those of us who’ve had a military life, some of us around this table, we’ve been taking this drug for years. As the president mentioned, the Department of Defense and VA have been using it for 65 years. On any given day, VA uses 42,000 doses of this drug, and what we did when this virus first hit us was to use every means necessary to help preserve life,” he said.

“So I want to knock down the phony story that this is somehow the VA going back on what the president told us to do, which was to use every means possible to protect and preserve the lives of our veterans. I think as the president mentioned, we’ve seen it in many cases across this country. In fact, I was on the news the day that the governor of New York was asking for tens of thousands of doses. So we are doing everything we can to protect the lives of our veterans, and this is one of the means that we use,” Wilkie said.

The study, which has been reported by the media to be a VA study, was paid for by grants from the National Institutes of Health and the University of Virginia, but has not been peer-reviewed.

“We performed a retrospective analysis of data from patients hospitalized with confirmed SARSCoV-2 infection in all United States Veterans Health Administration medical centers until April 11, 2020. Patients were categorized based on their exposure to hydroxychloroquine alone (HC) or with azithromycin (HC+AZ) as treatments in addition to standard supportive management for Covid-19,” the researchers said.

“The two primary outcomes were death and the need for mechanical ventilation. We determined the association between treatment and the primary outcomes using competing risk hazard regression adjusting for clinical characteristics via propensity scores. Discharge and death were taken into account as competing risks and subdistribution hazard ratios are presented,” they said.

“In this study, we found no evidence that use of hydroxychloroquine, either with or without azithromycin, reduced the risk of mechanical ventilation in patients hospitalized with Covid-19. An association of increased overall mortality was identified in patients treated with hydroxychloroquine alone. These findings highlight the importance of awaiting the results of ongoing prospective, randomized, controlled studies before widespread adoption of these drugs,” researchers said in their findings.