U.S. Conference of Mayors President: ‘No Cash Bail Is Creating Lawlessness in A Lot of Our U.S. Cities’ 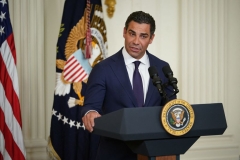 President of the US Conference of Mayors and Miami, Florida, Mayor Francis Suarez speaks during an event of bipartisan mayors attending the Conference's Winter Meeting, in the East Room of the White House in Washington, DC, on January 20, 2023. (Photo by MANDEL NGAN/AFP via Getty Images)

(CNSNews.com) - Miami Mayor Francis Suarez, who serves as president of the U.S. Conference of Mayors, said Sunday that cashless bail has led to an increase in crime, and he said mental illness in part has led to an uptick in mass shootings.

“What I'm focusing on is the no cash bail is creating lawlessness in a lot of our cities. What's happening is, for example, people get out right away. They're not even - you know, they don't even have to post bail, so they're able to get out right away,” he told CBS’s “Face the Nation” on Sunday.

“And so we're seeing someone go into like a CVS, for example, and - and take thousands of dollars' worth of merchandise, which is causing CVS' to close, which hurts, you know, the rest of the city, but that - that's not particularly related to - to the gun violence issue,” Suarez said.

“It's related more to petty crime, which is creating lawlessness in some of our cities, but what … we are seeing in the city of Miami is, you know, we are up-funding our police,” the mayor said. “You know, a lot of cities got into the defunding police movement and we're seeing that as a bipartisan issue.

“I said it at the White House, you know, just a couple days ago, and the president echoed what I said about up-funding police and not defunding police. So I think that is a bigger issue as we struggle with how we solve these issues in - on our cities,” Suarez said.

CBS’s Margaret Brennan asked the mayor what is driving the uptick in mass shootings like the one in California over the weekend.

“Yes, it's - it's so many different factors that are driving this. But, you know, one of the things that we focused a lot on in this mayoral conference that we just ended was mental health. Mental health is a huge component of what's driving a lot of these -- when you look at the root cause and you go back and you sort of peel back the layers of the onion,” Suarez said.

“Mayors are very concerned about it. We, obviously, had a panel, obviously, on urban crime, and certainly a lot of these mayors have talked about, you know, gun control in their cities. In our city, you know, we're very blessed. We had a great year. Our homicide level went down,” the mayor said.

“We've been able -- and I knock on proverbial wood, that we haven't had any of these mass shootings that we've seen across the country, which seem to be escalating in terms of frequency and in terms of, you know, the amount of times that we're seeing them. It's almost every day it seems like we're having one,” he said.

“So, it's been tough. It's something that mayors are grappling with across the country, and we're focusing in on it in a very comprehensive way,” Suarez said.