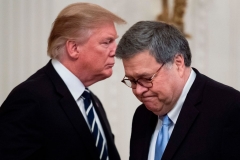 President Donald Trump (L) shakes hands with US Attorney General William Barr (R) during the Public Safety Officer Medal of Valor presentation ceremony at the White House in Washington, DC on May 22, 2019. (Photo by JIM WATSON/AFP via Getty Images)

(CNSNews.com) – Attorney General Bill Barr has not really looked at the evidence of voter fraud that the Trump campaign is seeing, President Donald Trump said Thursday, and that’s why the attorney general has said that “to date” he has not seen evidence of fraud that would overturn the election results.

Speaking to reporters in the Oval Office, Trump was asked given Barr’s comments why is it not the time to concede.

“Well he hasn’t done anything, so he hasn’t looked. When he looks he’ll see the kind of evidence that right now you are seeing in the Georgia Senate. You know they’re going through hearings right now in Georgia, and they’re finding tremendous volumes, so they haven't looked very hard, which is a disappointment, to be honest with you, because it's massive fraud.

“Whether you go to Wisconsin where we just filed a case or Michigan or if you look at what's happening in Georgia as an example or Pennsylvania. If you look at Nevada, which is moving along very rapidly, or Arizona. You saw those numbers come out yesterday. We found massive fraud, and in other states also. This is probably the most fraudulent election that anyone's ever seen,” he said.

“We went through an election. At 10:00, everybody said that was an easy victory for Trump. All of a sudden the votes started disappearing, miraculously disappearing, we found much of it, but we found far more votes than we need in almost all of these dates, and I think I can say in all of these states, far more votes than we need to win and every one of them,” he said.

“And I want to just thank my team, because my team is doing an unbelievable job and more importantly, I want to thank the 74 million plus people that voted, which was the largest amount of people that a sitting president has ever had, 74 million plus, and because the level of loyalty – I’ve never seen anything like it - all over the country, they know it was a fixed election. It was a rigged election. They know it, and I appreciate their support,” the president said.