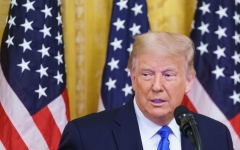 President Donald Trump speaks at an event honoring Bay of Pigs veterans in the East Room of the White House in Washington, DC on September 23, 2020. (Photo by MANDEL NGAN/AFP via Getty Images)

“Under the America First Healthcare Plan, we will ensure the highest standard of care anywhere in the world, cutting-edge treatments, state-of-the-art medicine, groundbreaking cures, and true health security for you and your loved ones, and we will do it rapidly, and it's in very good order, and some of it has already been implemented,” he said in a speech in Charlotte, N.C.

“In short, we are delivering better care with more choice, at much lower cost, and working to ensure Americans have access to the care they need,” Trump said.

The president contrasted his plan with the Democrats' health care plan.

By contrast, the Democrat Party is pushing a socialist nightmare. Their plans will result in rationing care, denying choice, putting Americans on waitlists, driving the best doctors out of medicine permanently, and delaying lifesaving cures. Over 130 Democrats in Congress, including Senator Harris, have endorsed legislation to outlaw the private health plans of 180 million Americans.

On top of it all, former Vice President Joe Biden promised to give free federal healthcare to anyone in the world who illegally crosses our border. His plan to provide government healthcare to illegal immigrants would bankrupt our healthcare system, collapse our hospitals, and destroy Medicare, while bringing millions and millions of people -- lured -- into our country. As long as I am president, we will safeguard our borders and our seniors.

“So today I'm laying out my vision for the future of American healthcare with the America First Healthcare Plan. As we restore America to full strength, the first healthcare plan will be a core part of our national renewal. In a few moments, I'll sign an executive order outlining the three pillars of my plan and directing my administration to implement these critical reforms. The first pillar of my plan is more choice -- more choice for the American patients,” Trump said.

”You remember that? Twenty-eight times that was stated by our president, but it turned out not to be true. When I took office, more than 50 percent of counties nationwide offered plans from only a single insurance company on the individual market. Starting next month, more than 90 percent of the counties will have multiple options to choose from, which is really some difference," he said.

“Under our plan, you'll have the freedom to shop for the option that is right for you and your family. These options include new, affordable choices that cost up to 60 percent less than Obamacare. Think of that: 60 percent less. For example, we're opening up short-term plans that are much cheaper than Obamacare and that can be customized to your individual needs," Trump said.

"We're also offering association health plans that allow small businesses to pool together and offer more affordable policies to the employees. These are tremendous options that didn't exist before we came into office, and through a massive expansion of health reimbursement arrangements, millions of Americans will be able to shop for a plan of their choice on the individual market and then have their employer cover the full cost," he said.

“My plan will also revolutionize access to telehealth. That’s something that really has taken off during the pandemic. It’s taken off like a rocket ship. It’s increased close to 9,000 percent. Nobody was using it, and when we had the pandemic, they started using it. Then they started really liking it,” he said.

Telehealth is “one of the few things that we got from this disaster that came from China,” Trump said.

“When we rapidly expanded its availability for Medicare beneficiaries during the pandemic, the number of telehealth users increased so incredibly to 14,000 a week. It was 1.7 million. It was increasing at levels that nobody has ever seen before in just about any kind of a program.  This is the future of healthcare. We will ensure all Americans have the freedom to consult with doctors from the safety and convenience of their homes,” he said.

“The second pillar of my plan is lower costs for families and seniors -- lower costs. For years, patients have been shocked to receive unexpected bills for thousands of dollars in medical services they never agreed to. The first America First Healthcare Plan bans this deeply unfair practice. We will end surprise medical billing. The days of ripping off American patients are over,” Trump said.

“For the first time ever, we will create true competition in healthcare. Both hospitals and insurance companies will be required to post all of their prices online. This transformative policy will allow you to see your exact out-of-pocket costs before you go for treatment, making it easy to shop for the best price. Costs will come way down. Some people think this will have a bigger impact than healthcare itself,” the president said.

“Next, I’m taking on the lobbyists and the special interests to lower the price of prescription drugs. For years, American patients have subsidized socialist nations,” he said, “by paying the highest drug prices in the world by far, and yet we're the largest purchaser of prescription drugs by far, and this is all while countries got away with paying so much less.”

Under the president’s plan, the United States will pay the same exact price as other countries for prescription drugs through the Favored Nations clause.