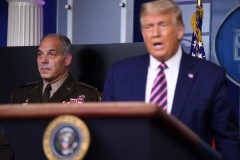 (CNSNews.com) – Immediately after a COVID-19 vaccine is approved, it will be delivered to the American people within 24 hours, President Donald Trump announced on Friday.

The president projects that enough vaccine will be produced for every American by April. He noted that there are three companies developing “somewhat different variations” of the vaccine so far.

“From the beginning of the China virus, all nations have understood our top priority must be to develop a vaccine as quickly as possible to end the pandemic and get life back to normal. The successful vaccine will not only save millions of lives, it will put an end to the restrictions and some of the things that go on and have to go on in the meantime,” Trump said at the White House press briefing.

“Since January, America's brilliant doctors and scientists have been working been working around the clock. These are the best medical minds in the world by far, and the vaccines are going through the gold standard of clinical trials and very heavy emphasis placed on safety. Three vaccines are already in the final stage,” he said.

It's part of their war to try to discredit the vaccine now that they know that we essentially have it. We will be announcing fairly soon. As part of Operation Warp Speed, my administration’s manufactured one of the most promising vaccines in advance.

As soon as a vaccine is approved, the administration will deliver it to the American people immediately. Distribution will begin within 24 hours after notice - and the general I think those are the words specifically you wanted us to use. Within 24 hours, you are all set to go, and massive amounts will be delivered through our great military, and the general is one of our best, and he's ready to go.

We’ll have manufactured at least 100 million vaccine doses before the end of the year and likely much more than that. Hundreds of millions of doses will be available every month, and we expect to have enough vaccines for every American by April. And again, I will say that even at that later stage, delivery will go as fast as it comes, they can deliver it very good, probably the best in the world.

The estimates I am providing today are based on the manufacturing that's in process, and that's in process immediately right now. We've already exceeded our ambitious goals under the Defense Production Act contracts that we've secured. We may even get far above these numbers that I'm telling you today.

We've seen them very, very substantially, and I think that also includes distribution, and I think distribution will go quicker than most people think, relying on our military. Everything I've done with our military has worked out very well. In a short time, we’ll have a safe and effective vaccine, and we’ll defeat the virus.