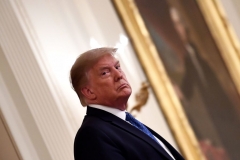 President Donald Trump looks on as US Attorney General William Barr (out of frame) delivers remarks on "Operation Legend: Combatting Violent Crime in American Cities" in the East Room of the White House, Washington, DC, on July 22, 2020. (Photo by BRENDAN SMIALOWSKI/AFP via Getty Images)

(CNSNews.com) – President Donald Trump announced on Wednesday that he is sending “a surge of federal law enforcement” into Chicago to help quell inner-city violence that has increased recently under the leadership of Mayor Lori Lightfoot and eventually into other U.S. plagued by an uptick in violent crime.

“In recent weeks, there's been a radical movement to defund, dismantle and dissolve our police departments. Extreme politicians have joined this anti-police crusade and relentlessly vilified our law enforcement heroes. To look at it from any standpoint, the effort to shut down policing in their own communities has led to a shocking explosion of shootings, killings, murders and heinous crimes of violence. This bloodshed must end. This bloodshed will end,” he said in a speech in the East Room of the White House.

"Today I'm announcing a surge of federal law enforcement into American communities plagued by violent crime. We’ll work every single day to restore public safety, protect our nation's children, and bring violent perpetrators to justice. We have been doing it, and you’ve been seeing what is happening all around the country. We just started this process, and frankly we have no choice but to get involved,” Trump said.

The president said that politicians running major U.S. cities “put the interest of criminals above the rights of law-abiding citizens” for decades and are now embracing “the far left movement” to break up police departments as part of the Black Lives Matter movement, “causing violent crimes in the cities to spiral … out of control.”

“In New York City over 300 people were shot in the last month alone - a 277, at least percent increase over the same period of a year ago. Murders this year have spiked 27% in Philadelphia, 94% in Minneapolis compared to the same period in 2019,” Trump said.

“Perhaps no citizens have suffered more from the menace of violent crime than the wonderful people of Chicago, a city I know very well. At least 414 people have been murdered in the city this year. A roughly 50% increase over last year. More than 1,900 people have been shot. These are numbers that aren't even to be believed,” the president said.

“Behind each of these horrifying statistics is a victim, a family, a loved one and a life of cruelly shattered, and it’s just so sad to see and so sad to look and so sad to see how these lives have just been just torn apart. An African-American father of three was killed while walking into a store to pay his cell phone bill,” he said.

“A 13-year-old girl was killed when a stray bullet came through the window of her home and hit her in the neck in the presence of her family. On Independence Day, 14-year-old Vernado Jones Jr., was playing basketball with family and friends and in a Chicago park when he was senselessly killed in a massacre that left eight people dead or wounded,” the president said.

He said that every American regardless of income, race, or zip code “should be able to walk the city streets free from violence and free from fear.”

“For this reason today, I am announcing that the Department of Justice will immediately surge federal law enforcement to the city of Chicago,” the president said, adding that the FBI, ATF, DEA, U.S. Marshals Service, and DHS will be working together to send “hundreds of skilled law enforcement officers to Chicago to help drive down violent crime.”

Prior to the president’s formal announcement, Chicago’s mayor voiced her opposition out against the president’s plans, tweeting, “Under no circumstances will I allow Donald Trump’s troops to come to Chicago and terrorize our residents.”

Trump said that federal agents will be working with local police “to identify violations of state and local laws to help ensure that offenders are caught and jailed for their crimes.”

“But we must remember that the job of policing a neighborhood falls on the shoulders of local elected leadership. Never forget that. When they abdicate their duty, the results are catastrophic. Americans must hold their city leaders accountable. They must insist that community officials, fully support, fully back, and fully fund their local police departments,” he said.

“There is simply no substitute for a police department that has the strong backing of city leaders. In the meantime, we will use federal law enforcement to vigorously charge federal crimes and support these besieged communities to the greatest extent possible. This will be hard, painstaking work. It will take time. The tide will not recede overnight, but we will marshal all of the strength and focus and determination that we can possibly do,” the president said.

Trump said the law enforcement intervention in Chicago will be part of Operation Legend, named after four-year-old Legend Taliferro, who was shot and killed in his bed in Kansas City, Mo.

The president said that local leaders should want federal intervention to deal with the violence on their streets, but “they’re too proud or they’re too political to do that.”

He also announced that the DOJ will provide funds for cities to hire new officers, and he pledged that his administration will “never defund the police.”

“This afternoon, I’m also announcing that the Department of Justice will provide more than 61 million dollars in grants to hire hundreds of new police officers in cities that are the focus of Operation legend. We will never defund the police. We will hire more great police. We want to make law enforcement stronger, not weaker. What cities are doing is absolute insanity,” Trump said.

The president also made the correlation between violent crime and sanctuary cities.

“Many of the same politicians who want to slash resources for law enforcement have also declared that their cities are sanctuaries for criminal illegal aliens. In other words, after arresting illegal aliens for crimes, the police are ordered to release the criminals back onto the streets to continue their crime. Last year, Chicago politicians forced the release of illegal aliens charged with crimes such as assault, armed robbery, strangulation and attempted murder,” he said.

“My administration will be working to remove dangerous offenders, sprung loose by these deadly policies and frankly by these deadly politicians. America must be a sanctuary for law abiding citizens, not criminal aliens. My vision for America’s cities could not be more different from the lawlessness being pushed by the extreme radical left. While others want to defund, defame, and abolish the police, I want to support and honor our great police,” Trump said.