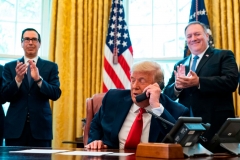 President Donald Trump speaks to the leaders of Sudan and Israel as he announces that Sudan will normalize relations with Israel at the White House in Washington, DC, on October 23, 2020. (Photo by ALEX EDELMAN/AFP via Getty Images)

(CNSNews.com) – President Donald Trump secured a peace deal between Sudan and Israel, making it the third Middle Eastern country after the United Arab Emirates and Bahrain to do so, the president announced on Friday.

“The state of Israel and republic of Sudan have agreed to make peace. This is for many, many years they’ve been at odds to put it nicely, and to normalize their relations. This will be the third country where we’re doing this, and we have many, many more coming,” Trump said.

“In the coming weeks, they will meet to negotiate cooperation agreements. You saw that happen with UAE and Bahrain recently in agriculture, technology, aviation, migration, and other critical areas. This historic deal comes just a few weeks after the groundbreaking agreement between Israel and the United Arab Emirates and Israel and Bahrain,” he said.

“Three months ago, no one thought this would be possible,” the president said, adding that not even Israeli Prime Minister Benjamin Netanyahu thought it was possible.

“But now multiple Arab countries across two continents have made peace with Israel, and again, we have many lined up,” Trump said.

“For much of recent history, the people of Sudan were ruled over by brutal Islamic dictatorships. It was the home of Osama bin Laden, a place of terror, genocide and many other tragedies. Today, a great people of Sudan are in charge, and new democracy is taking root,” he said.

“Who would have thought that Sudan and Israel would end up in an accord to actually have a peaceful transition and relationships? I don't think that if you had betting odds that those would have been anything less than 100 to 1, and yet this president was able to accomplish that,” he said in an interview with “Outnumbered Overtime with Harris Faulkner.”

“So now we have three down. We have several more to go, and this president is laser focused on delivering on behalf of the American people on his promises, and this was supposed to be his weak point,” the chief of staff said, adding that “this is really the difference between a politician and a business guy, a business guy in Donald J. Trump that happens to be the 45th president of the United States.

“He only believes that it matters if you get results, and he’s been delivering, and today was a big day for the world,” Meadows said.

Faulkner pointed to an article in Politico that said that Trump could have accomplished more this year if not “distracted and preoccupied by the sideshow.”

“It’s the Democrats that have conducted a sideshow, Harris. You know it. You’ve covered it. It’s been the impeachment. It’s been the Russia hoax, this president has been under attack from the left and from Democrats on Capitol Hill since the very first day and even before the first day he was sworn in office,” Meadows said.

“So we talk about a sideshow. Historically there has not been any president that has accomplished more in the first four years than this president. We’ve got an embassy in Jerusalem. We have lower taxes for Americans. We had record unemployment for all kinds of demographic groups that this president continued to deliver and is delivering. We have a peace deal today,” he said.

“If that is looking and not focusing on the real issue, I want more of it, and when we look at this, this was all about Joe Biden last night flip-flopping. It's 47 years of political rhetoric that doesn't actually produce any results. It's all words, no action,” Meadows said.