Former US President Donald Trump speaks during a rally in Delaware, Ohio, on April 23, 2022. (Photo by MEGAN JELINGER/AFP via Getty Images)

(CNSNews.com) - Former President Donald Trump, who has referred to himself as the most pro-life president in history, applauded Friday’s Supreme Court decision overturning Roe v. Wade in Dobbs v. Jackson Women's Health Organization, calling it “the biggest WIN for LIFE in a generation.”

“Today’s decision, which is the biggest WIN for LIFE in a generation, along with other decisions that have been announced recently, were only made possible because I delivered everything as promised, including nominating and getting three highly respected and strong Constitutionalists confirmed to the United States Supreme Court,” Trump said in a statement.

“It was my great honor to do so! I did not cave to the Radical Left Democrats, their partners in the Fake News Media, or the RINOs who are likewise the true, but silent, enemy of the people,” the former president said.

“These major Victories prove that even though the Radical Left is doing everything in their power to destroy our Country, your Rights are being protected, the Country is being defended, and there is still hope and time to Save America! I will never stop fighting for the Great People of our Nation,” he said.

“Today, Life Won. By overturning Roe v. Wade, the Supreme Court of the United States has given the American people a new beginning for life and I commend the Justices in the majority for having the courage of their convictions,” Pence tweeted.

“By returning the question of abortion to the states and the people, this Supreme Court has righted a historic wrong, and reaffirmed to right of the American people to govern themselves at the state level in a manner consistent with their values and aspirations,” he wrote. 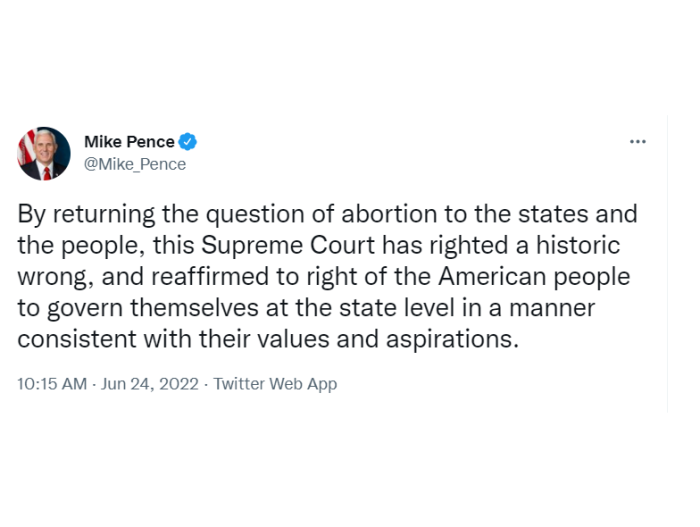 “Now that Roe v. Wade has been consigned to the ash heap of history, a new arena in the cause of life has emerged and it is incumbent on all who cherish the sanctity of life to resolve that we will take the defense of the unborn and support for women in crisis pregnancies to every state Capitol in America,” the former vice president tweeted.

“Having been given this second chance for Life, we must not rest and must not relent until the sanctity of life is restored to the center of American law in every state in the land,” Pence added. 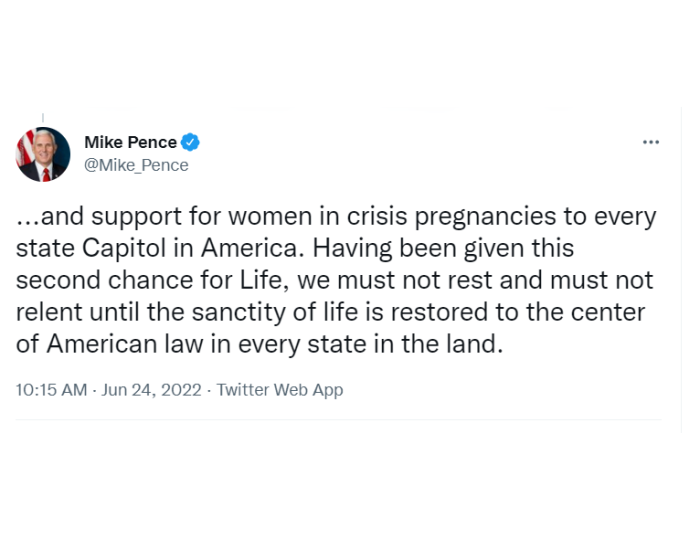