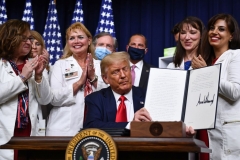 (CNSNews.com) – President Donald Trump signed four executive orders on Friday aimed at lowering the cost of prescription drugs, the first of which, he says, will lead to the cost of insulin dropping to “just pennies a day.”

“The four orders I’m signing today will be on the prescription drug market in terms of pricing and everything else to make these medications affordable and accessible for all Americans. The first order will require federal community health centers to pass the giant discounts they received from drug companies on insulin and EpiPens directly to their patients. You know insulin became so expensive people weren’t able to use it. They desperately needed it,” he said.

“We have it to a level that you’re not going to believe. EpiPens - likewise you have been hearing horrible stories about EpiPens over the last six or seven years, horrible, horrible, horrible increases for where they went to almost nothing to massive amounts of money. We’re changing that right now,” the president said.

“These providers should not be receiving discounts for themselves while charging their poorest patients massive full prices. Under this order, the price of insulin for affected patients will come down to just pennies a day, pennies a day from numbers that you weren't even able to think about. It's a massive cost savings,” Trump added.

The second executive order “will allow states, wholesalers, and pharmacies to do something other politicians have promised for decades and decades but never done .. allow the safe and legal importation of prescription drugs from Canada and other countries where the price for the identical drug is incredibly lower.”

He said Americans pay on average “three times more for medicine than Canadians.

“Many people go to Canada, I see it all the time. They go to Canada to buy drugs and then they come back. Prescription drugs because they save so much money, the trip is well worth it. The Obama-Biden administration pledged to end this unfairness, allow drug importation, but they never got it done. They weren't able to get it done. They didn't get a lot of things done, but under my administration, we are standing up to the lobbyists and special interests and fighting back against a rigged system, rigged system,” Trump said.

The third executive order cuts out the middleman who are “bilking Medicare patients” with high drug prices “while they pocket gigantic discounts,” the president said.

“The fourth and final order I am signing today is the granddaddy of them all,” Trump said, and “will end global freeloading on the backs of American patients and American seniors.”

“A pill that would cost $1 would be $7 or $8 in our country,” he said, adding that the U.S. is paying 80 percent more than nations like Germany, Canada, and others for some of the most expensive medicines identical in all respects.”

“This means that Americans are funding the enormous cost of drug research and development for the entire planet. We are bearing the entire cost of all of this. They are bearing none. They say that this is what we are going to pay. In some cases, it’s the socialist country. So we are paying to reduce drug prices in a socialist country. How does that work?” the president said.

Under the executive order, Medicare will be required to buy drugs at the same price that other countries pay,” Trump said.