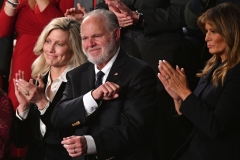 Radio personality Rush Limbaugh pumps his fist as he is acknowledged by US President Donald Trump as he delivers the State of the Union address at the US Capitol in Washington, DC, on February 4, 2020. (Photo by MANDEL NGAN/AFP via Getty Images)

(CNSNews.com) –  Former President Donald Trump on Wednesday reacted to the news of the passing of conservative radio host Rush Limbaugh, whom he awarded the Presidential Medal of Freedom last year during the State of the Union address, remembering him as “a patriot” and “defender of liberty.”

“His honor, courage, strength, and loyalty will never be replaced,” Trump said in a statement. “Rush was a patriot, a defender of Liberty, and someone who believed in all of the greatness our Country stands for. Rush was a friend to myself and millions of Americans—a guiding light with the ability to see the truth and paint vivid pictures over the airwaves.

“Melania and I express our deepest condolences to his wonderful wife, Kathryn, his family, and all of his dedicated fans. He will be missed greatly,” he added.

Speaking to Fox News’s “America Reports,” Trump said he spoke about his friendship with Limbaugh, whom he spoke with three or four days ago.

“I called him just to find out… you know his fight was very, very courageous, and he was very, very sick, and you know from diagnosis on, it was just something that was not going to be beaten, but you wouldn't know it, and he is married to an incredible woman, Kathryn, who really, every time I spoke to him, he would tell me how great she was,” he said.

“She took such great care. He was very brave. I mean he, in theory, could have been gone four months ago, really. He was fighting until the very end. He was a fighter,” Trump said.

When asked how he viewed the way Limbaugh carried the former president’s message or chose to agree or disagree with his policies, Trump said, “He had an audience that was massive, and you know, he could do something, Bill, and he would get up and just talk. He wouldn't take phone calls where people will call in every two minutes. That’s sort of easy to do.

“He would just talk for two hours and three hours, just talk, and that's not an easy thing to do, and I once asked him, I said, do you study for the show? And he said actually, I study very hard, which a little bit, that a little bit surprised me but he was a fantastic man, a fantastic talent and people, whether they loved him or not, they really respected him. They really did,” he said.

The former president spoke about how their friendship former and that in the summer of 2015, he got a call from a friend telling him that Limbaugh loved him.

“I got a call from a friend of mine who was a big Rush fan, and he said, ‘Rush loves you.’ I said, ‘I don't see that. I hadn't heard.’ I'm not able to listen to the radio during the afternoon too much here on the trail, and you're making speeches or doing whatever you're doing. I was actually making speeches and running a business. I was doing both of them simultaneously, right?” the former president said.

“And he just told me that, and all of a sudden I started getting little transcripts. I would try to listen every once in a while. He was there right from the beginning, and it was incredible, and then I guess I called him just to thank him, and we developed just some very good friendship. We played golf
together a little bit. He was a very strong guy, physically very strong, hit the ball a long way. He was tough,” Trump said.

When Limbaugh was awarded the Presidential Medal of Freedom, Trump said, “It was a very unique moment in our country's history in a sense because of who Rush is. Half went just absolutely crazy. The other half sat totally dead silent, but 100 percent of that room respected Rush.”

“He was unique guy, and he became a friend of mine. I didn't know Rush at all. I had essentially never met Rush, and then when we came down the escalator, he liked my rather controversial speech,” the former president said.

The former president said that Limbaugh was “so gracious and so great.”

“He had an incredible instinct for politics. He has an incredible instinct for life. He was -- I walked into a room, and there’s a lot of people in the room, and they’re all very sad to see - people that you wouldn’t even think about with respect to Rush - but they’re very sad to see that Rush passed away. He was a legend. There aren't too many legends around, but he is a legend. To those people that listened to him every day, it was a religious experience for a lot of people,” he said.

Limbaugh was “a man of the future” who “loved this country so much,” Trump said.

“He loved the people of this country so much. He was so happy with what we did. We rebuilt the military - all things he likes. We cut taxes. We cut regulations, may be more important than the tax cuts frankly. That's why we built the foundation that can propel us if it's not messed up -- but Rush was somebody that, he loved talking about the country and the future. He was a future-person,” Trump added.

“He was very proud of the country, disappointed by certain things that happened in the country, but he thinks that it will all work out. He was something special. He would express it very well on the show. He was very open. He was very open to his listeners, of which there were record numbers,” the former president said.

When asked how much contact he had with Limbaugh over the last two months, Trump said, “Quite a bit, but he was really sick. Rush, his ambition -- if you go back to after he had heard the diagnosis, because it was a very bad thing he had. It's not something like oh, you will be better in two weeks. He got the word, and it was terminal, absolutely terminal.

When asked what role Limbaugh wanted to see Trump play next, the former president said, “We didn't talk too much about that. I didn't want to talk about that too much, either, because I was disappointed by voter tabulation. I think it's disgraceful what happened. We are like a third world country on election night with the closing down of the centers and all of the things that happened later in the evening. He was furious at it, and many people are furious.

“You don't know how angry this country is. People were furious, but he was somebody, at the same time, he thinks about the past, but he projects to the future. That was Rush. He wants to learn from the past and get things fixed, but he was somebody that felt it was an important victory for us,” Trump said.