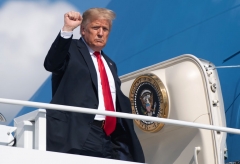 (CNSNews.com) – Rioters who tear down statues that they disagree with are vandals, agitators, in a sense “terrorists,” President Donald Trump said at a Fox News town hall in Green Bay, Wis., on Thursday hosted by Sean Hannity.

When asked what his administration is doing to take back the streets from rioters who have ripped statues off their pedestals and beaten up a senator, Trump said, “So, very strong,” adding that if the state had a Republican governor, that wouldn’t have happened.

Trump predicted that if former Vice President Joe Biden is president he would let the radical left take over the country.

“I don’t think Biden is a radical left, but it doesn’t matter because they’re going to just do whatever they want to do.  They’ll take him over.  He can’t -- he can’t perform.  He’s not going to be able to perform. He’s shot. He’s shot. Whether you like it or not, he’s shot. The radical left is going to take him over,” the president said.

“Look what happened: Eliot Engel was a pretty mainline guy.  He lost by like 37 points or something.  He just got killed in the election we just had yesterday. He was supposed to be a shoe-in, and he got hit by a strong, far-left candidate,” Trump said, referring to Jamaal Bowman, a former middle school principal and first-time candidate.

“Look at what’s happened to the Democrats, and these are real lefties. These are people that -- take a look at Venezuela. Venezuela was a very rich country, a great country -- a beacon 20 years ago, 15 years ago. People looked -- richest country in Latin, South America, richest -- everything good. They don’t have food. They don’t have water. They have death all over. People have nothing,” the president said.

“It’s the same exact mindset and philosophy that we have today on attack, and it won’t happen, not while I’m here. It won’t happen, but a guy like Biden, he’s going to have no power to do anything about it, and they’re dragging him. I don't know if you saw -- Bernie Sanders said, ‘My sole focus now is to take Joe Biden way left.’ They’re going to do it, because there’s nobody in the center-left anymore. He was left anyway, but there’s nobody in the center or center-left. I mean, it’s a disgrace what’s happened to our country,” he said.

The president called on Republicans to “get tougher” and not worry about being politically correct.

“Now, with that being said, the Republicans have to get tougher, and I’m telling them all the time, because they’re sitting back. They want to be politically correct. They think, ‘Oh, it’s terrible to say something bad.’ No, no, no. I told them, ‘You’ll see. If anyone attacks…’ I stopped it the other night. I stopped it a number of times, but you’ll see what’s happening, and we told them: Every night, we’re going to get tougher and tougher. And at some point, there’s going to be retribution, because there has to be,” he said.

These people are vandals, but they’re agitators, but they’re really -- they’re terrorists, in a sense. So I think you’ll be extremely impressed, but you have to put pressure. Also, I love the Republicans -- I told you, they came for me 100 percent. I’m at 96 percent approval rating in the Republican Party, but I said, ‘You’re going to have to get tougher. You can’t be politically correct anymore,’ because we’re really fighting something that’s very dangerous,” Trump added.