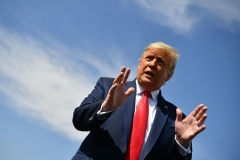 President Donald Trump speaks to members of the media upon arrival at Phoenix Sky Harbor International Airport in Phoenix, Arizona on October 19, 2020. (Photo by MANDEL NGAN/AFP via Getty Images)

(CNSNews.com) – President Donald Trump on Monday called Democratic presidential nominee Joe Biden “a criminal” and called a reporter and the rest of the media “a criminal” for not reporting it.

Speaking to reporters in Phoenix, Ariz., Reuters White House Correspondent Jeff Mason asked Trump, “Your campaign strategy seems to be to call Biden a criminal. Why is that?”

“Let me tell you something. Joe Biden is a criminal, and he's been a criminal for a long time, and you're a criminal and the media for not reporting it,” he said.

The president predicted he will do better than he did in 2016.

“We’re way ahead of where we were in 2016, and I've done things and nobody's ever done. We built the greatest economy in the world, and we’re building it rapidly again,” he said.

"Republican-run states are doing phenomenally,” Trump said, while “Democrat-run state are not, but they're not going to affect our numbers very much. I think it will open up on November 4th.”

He wondered why NBC White House Correspondent Kristen Welker, who will be the moderator of the last presidential debate this week, deleted her Twitter account.

When asked whether the moderator should be able to turn off microphones, the president said, “I have no idea.”

“What am I doing to prepare? I'm doing this. I've done very well in debates and you do what you do. You just do what you do. The last debate, I had two on one. I usually have two on one at least, and I did well on the last debate, and we did well with Savannah Guthrie based on reports. Look, you go around, we do interviews with you, I call this debate prep. This is actually tougher than the debate if you want to know the truth,” he said.

Trump said he has no problem with doing a COVID test before the debate.

“I would have no problem with it. Not only am my free, positive or whatever—what would you call it? I'm totally free, right? Not only am I free, I'm immune, they say. They say if you've had it, you are immune. The question is, are you immune for four months or for the rest of your life? That's the only thing we don't know,” the president said.