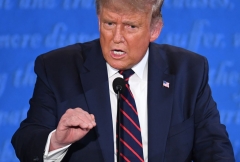 “You have repeatedly criticized the vice president for not specifically calling out Antifa and other left-wing extremist groups, but are you willing to condemn white supremacists and militia groups and to say that they need to stand down and not add to the violence in a number of these cities, as we saw in Kenosha and as we've seen in Portland. Are you prepared to do that?” Wallace asked.

TRUMP: Sure, I’m willing to do that. I would say almost everything I see is from the left wing, not the right wing. I'm willing to do anything. I want to see peace.

WALLACE: Then do it, sir.

BIDEN: Do it, saying it.

TRUMP: What do you want to call them? Give me a name.

BIDEN: Antifa’s an idea, not an organization, not a militia.

TRUMP: You've got to be kidding.

WALLACE: We are done, sir. Moving on.

TRUMP: You know what? He’s wrong. Antifa is not an idea.

BIDEN: Everyone who gives in your administration who tells you the truth has a bad idea.

TRUMP: Antifa is a dangerous, radical group and you ought to be careful of them. They’ll overthrow you.