Trump: Portland’s Mayor Was ‘Thrown Out of His Home' 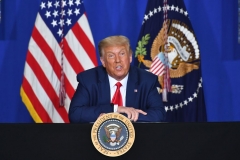 (CNSNews.com) - Portland Mayor Ted Wheeler is looking for a new home after rioters attacked the condominium where he lives.

Wheeler sent an email to residents of the building on Tuesday, saying it would be “best for me and for everyone else’s safety and peace.”

“I want to express my sincere apologies for the damage to our home and the fear that you are experiencing due to my position,” according to a screenshot of the email sent to The Oregonian/OregonLive. “It’s unfair to all of you who have no role in politics or in my administration.”

President Donald Trump, speaking in Wilmington, N.C., on Wednesday said that Wheeler was “thrown out of his home” and yet the mayor is standing up for them, but all rioters know is “strength.”

“American warriors did not defeat fascism and oppression overseas to watch our freedoms being trampled by violent mobs. We stop those violent mobs very easily. All they have to do is say, ‘please come in, Mr. President.’ We'll have it done in an hour,” he said.

“As you know, Portland, the mayor last night, he was raided. He was thrown out of his home. Then he will stand up and fight for these people. These people only know one thing, and that is strength. That's all they know - strength. We have strength,” the president said.

“For the sake of all Americans, we must uphold the rule of law and defend the American dream for every child in our land. We must teach our children that America is the land of heros like you. You're heroes. You know that, right, woody? You're heroes. You’re great, great men. Great men. Better believe it. In America, we're not ashamed of anything,” he said.

Trump said that because of an executive order he signed recently protesters are no longer targeting statues.

“I signed a very important edict recently. Three months ago, they were ripping down statues. I said you can rip them down, but you're going to serve 10 years in jail if you do. As soon as I did that, incredibly you haven't heard about statues coming down, have you? Statues or monuments. We're not ashamed of our country. We're proud of our country, prouder than we are of anything else,” he said.