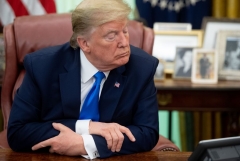 Speaking to reporters at a White House cabinet meeting with the governors of Colorado and North Dakota, Trump was asked if he agrees that the latest stimulus should move forward.

“I don’t know. It depends. Certainly not the package that I saw today,” he said. “Basically, if you look at that package, what they want more than anything else is -- it’s a voting package. They want to be able to make sure that Republicans can’t win an election by putting in all sorts of mail-in ballots.”

In California, Republican Mike Garcia is the projected winner for the California House seat vacated by Rep. Katie Hill (D-Calif.) beating out Democrat Christy Smith and flipping the seat. Smith conceded on Wednesday as a large number of mail-in ballots continued to be counted. Garcia was leading by more than 12 percentage points at the time, NPR reported.

“Now, I don’t know if you knew, because the press doesn’t report this too much, but we had two very big victories last night. We won very big. Tom Tiffany won very big in the great state of Wisconsin. You saw that. That was -- last night it came in. That was a big one - you saw that, Doug - and won by a very, very substantial margin,” Trump said.

“And in California, of all places, we had a fantastic race, and this was all mail-in ballots. This was all mailed ballots, and when they saw -- because it was mailed, they saw they were losing three days ago, and they ended up putting polling booths in, into basically Democrat areas,” he said.

“But despite that, it’s looking like Mike Garcia -- I don’t know if they’ve called the race yet, but he was substantially ahead. That’s the problem with mail-in ballots. Are they going to dump a whole pile of ballots on your desk just before the election?” the president asked.

“And I do think you should mention the fact that the Republicans won two major congressional seats last night. I think it’s really worthy of mentioning,” he said.

When asked whether the bill is a “non-starter” or whether there’s anything in the bill that he could support, Trump said, “Well, it’s, as they say, ‘DOA.’ Right? DOA. Dead on arrival. Of course, Nancy Pelosi knows that, you know, obviously.”