Trump: Obama Could Have Solved Chicago’s High Murder Rate, But He Didn’t 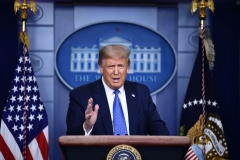 (CNSNews.com) – Former President Barack Obama was at fault for the increase in homicides in Chicago in 2016, because he was invited in and could have solved the problem, whereas President Donald has faced opposition from Chicago Mayor Lori Lightfoot in deploying federal agents to quell violent crime in the city, the president said on Wednesday.

At a White House press conference, CNN White House Correspondent Kaitlan Collins asked: “So, on crime: In 2016, you said it was President Obama's fault that homicides were up in Chicago.  So why was it the President's fault then, but it's not your fault now?”

“Chicago is a disaster,” Trump responded. “The mayor is saying, ‘Don't come in.’ The mayor is telling us not to come in. At some point, we can void that if we have to, but we -- and we may have to, at some -- because it's out of control. I assume she's saying that for political reasons. I think it's negative political reasons.

“Right, but why was it President Obama's fault in 2016? You credited it as him being in office,” Collins asked.

“Because President Obama was invited in, and he did a poor job, ” Trump said. “President Obama could have gone into Chicago. He could have solved the problem, and he didn’t. In our case, they don’t want us in. We can solve the problem very easily. We’re equipped with the best equipment, the best people, and you see what we're doing. I mean, Portland was coming down.

“It was busting at the seams, and we went in and protected all the federal buildings. Those federal buildings are totally protected, and we had to do that, and Portland is a very different place than Chicago, but Chicago should be calling us -- and so should Philadelphia and Detroit and others -- to go in and really help them.

“Because when you're losing many people a weekend -- many, many people; you see the same numbers as I do -- when you’re losing these people, they should call us, and they should say, ‘Come on in,’ and it's incredible to me, but they're not doing it. At some point, they will. At some point, we may have no other choice but to go in,” the president said.