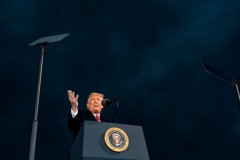 He told supporters in Greenville, N.C., on Thursday that someone told him he’s the most famous person in the world.

Trump disputed that, saying he’s not more famous than Jesus.

“They said, yes, you are,” the president said.

“I'm not taking any chances. Hey, I'm not having any arguments. Jesus Christ. I'm not gonna take any chances, and let me look up, and I’ll say, it's not even close,” he said.