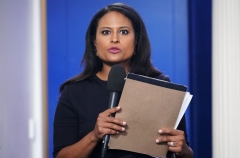 “Kristin Welker is terrible. She is totally partisan. Her father and mother are big supporters of Joe Biden for a long time, They're supporters of the Democrat Party, and she deleted her entire account, and I was the one that told you people about Scully. Scully was no baby either, and then he got caught lying with his famous, oh, they hacked my account,” Trump said in an interview with Fox News’s “Fox and Friends.”

“You know, every time somebody gets caught, they always say, they hacked my account. Here we go again with the hacking, so he had a problem, but Kristin Welker is far worse than Scully,” the president said.

Trump was asked to respond to the news that the presidential debate commission implemented a two-minute rule and use a mute button for the last debate to mute Trump’s microphone when Democratic presidential nominee Joe Biden answers a question for the first two minutes and then mute Biden’s while Trump answers for the next two minutes.

Well, I think the whole thing is crazy. This commission, I had problems with them four years ago where they stifled out my mic during my conversation with Crooked Hillary, and, you know, they muted my mic. They did a whole thing -- they did this to me already. They modulated it at the time, and they actually had to write me a letter of apology. They did it on purpose.

These people are not good people, this commission. A lot of funny things go on with them and, frankly, Kristin Welker, who I know, I just went through Savannah Guthrie. I knew what I was getting into and it worked out fine, but she was out of line. She was totally out of line, and so was Chris Wallace.

I know you'll defend him, but so was Chris Wallace. He was terrible. It was like two on one, and that was just fine with me, but at least they should admit that it was two on one. The funny thing is Biden doesn't even do his show. Biden won’t even go on his show. He'd get killed if he was on his show. He couldn't do Chris's show.

But Kristin Welker is terrible. She is totally partisan. Her father and mother are big supporters of Joe Biden for a long time, They're supporters of the Democrat Party, and she deleted her entire account, and I was the one that told you people about Scully. Scully was no baby either, and then he got caught lying with his famous, oh, they hacked my account.

You know, every time somebody gets caught, they always say they hacked my account. Here we go again with the hacking, so he had a problem, but Kristin Welker is far worse than Scully. I do it anyway. This is the way it is. It's so set up. It's incredible that we've been winning for so long. When you get right down to it that's not fair.

I mean, it would be nice to have a host that could be not necessarily a contributor to the campaign and the Democrats. There are people out there that could be neutral. Kristen Welker cannot be neutral at all.

When asked what he has learned after his first debate with Biden, Trump said, “Well, Joe lies, and he lies a lot, and he'll say things that are crazy, and he'll think people are supposed to believe him, and they take ads and they put ads in on things that never happened far worse than Hillary.

“Hillary was a much smarter person than him, but they play a much dirtier game, and she was dirty. I mean, look, with the emails and everything else, I'm not talking about that. She was terrible. They play a more dishonest game. They will put an ad in about something that never happened and pretend like it happened. They are very dirty players,” he said.

“Will you answer the previous question like Mike Pence did and then answer their question?” Fox host Brian Kilmeade asked.

“Well, look, I do my own debating. I do fine, and I do my own debating, and a lot of people said I won. If you look at the Hispanic, very interesting, they did a Hispanic population poll, and I was at 77%. A lot of people thought, look, when somebody stands there and he lies, lies, lies, I like to challenge it at the time because you don't have time to go back,” the president said.

Trump was asked whether he would change his strategy and interrupt Biden less so the former vice president can share his ideas, because America might not be too keen on those ideas.

“Well, I may do that. Actually the interesting thing [is] they said if you let him talk, he'll lose his train of thought because he's gonzo, and I understand that, but I also understand that as he's going down the line and issuing lies, generally, it’s okay to really attack that, but there is a chain of thought that, you know, there were a lot of people that say let him talk because he loses his train, he loses his train, he loses his mind, frankly,” the president said.

“And, frankly, it was a change that they made that was far bigger than the mute button, I mean, frankly, but they made a change, and it shouldn't have happened,” the president said. “You know that. This was all going to be foreign policy, and all of a sudden out of nowhere they made this change. Now we're talking about other things.

“This is not appropriate. Look, the commission has lost tremendous credibility. They lost it with me four years ago when they modulated the mic. I understood that, and you look at -- look at Bob Dole. He wrote a letter saying that he knows the people, and these are not the right people to have. He was very nice in writing that, I must say,” Trump said.

“Mr. President, have you heard back from the commission? I know your campaign was raising objections about the fact that this was supposed to be a foreign policy debate, and they sent a letter to the commission. Your campaign agreed to the debate because you agreed to focus on foreign policy, and when you look at the topics, that's not included,” Fox host Ainsley Earhardt asked.

“Well, we want the debate, and I know they're discussing it. Yeah, they're talking back and forth with the commission. They want to have it be at least not fair, because it can never be fair with Kristin Welker. It's not going to be fair. It would be like Scully or like Chris Wallace. There's nothing fair about this debate, but that's okay,” Trump said.

“Hey, look, Savannah Guthrie, I knew what I was getting into. I've been with her for a long time in terms of interviews. That was crazy. I mean, she was jumping out of her seat, but it was a good interview. We got very high marks in that interview, but she was--I thought she was totally out of control,” he said.