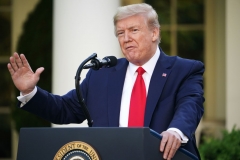 (CNSNews.com) - When asked what authority he had in mind when threatening to overrule governors on reopening houses of worship, President Donald Trump said Tuesday that he “can absolutely do it” if he wants to.

“I can absolutely do it if I want to, and I don’t think I’m gonna have to, because it's starting to open up. We need our churches and our synagogue and our mosques. We want them open - churches, synagogues, mosques and others. We want them open, and we want them open as soon as possible,” Trump said during a White House Rose Garden press conference on protecting seniors with diabetes.

“I can tell you I know a lot of pastors, a lot of rabbis, imams. They want to take care of their people. They don't want anyone getting hurt or sick, and they're going to take care of their people. We need these people. We need people that are going to be leading us in faith, and we are opening it up and if I have to, I will override any governor that wants to play games,” he said.

“If they want to play games, that's okay, but we will win, and we have many different ways where I can override them, and if I have to, I'll do that, but we want our churches and our synagogues and our mosques et cetera, we want them open,” the president said.

Trump said it should be left up to pastors and churches as to whether they want to remain closed.

“Now there may be some areas, by the way, where the pastor or whoever may feel that it's not quite ready, and that's okay. That's okay, but let that be the choice of the congregation and the pastor,” he said.

As CNSNews.com previously reported, Trump announced on Friday that he was directing the Centers for Disease Control and Prevention “to issue guidance for communities of faith.”

He said houses of worship should be considered essential along with grocery stores.