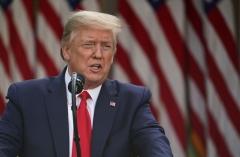 President Donald Trump speaks during a news conference on the novel coronavirus, COVID-19, in the Rose Garden of the White House in Washington, DC on April 27, 2020. (Photo by MANDEL NGAN/AFP via Getty Images)

As CNSNews.com previously reported, Trump announced in April that he would temporarily halt funding for the WHO “to see if they can make meaningful reforms.”

“China has total control over the World Health Organization, despite only paying $40 million per year compared to what the United States has been paying, which is approximately $450 million a year,” Trump said at a White House Rose Garden press conference.

“We have detailed the reforms that it must make and engage with them directly, but they have refused to act. Because they have failed to make the requested and greatly we needed reforms, we will be today terminating our relationship with the World Health Organization and directing those funds to worldwide and deserving, urgent global public health needs,” he said.

“China's cover-up of the Wuhan virus allowed the disease to spread all over the world, instigating a global pandemic that has cost more than 100,000 American lives and over 1 million lives worldwide. Chinese officials ignored their reporting obligations to the World Health Organization and pressured the World Health Organization to mislead the world when the virus was first discovered by Chinese authorities,” the president said.

Trump announced that he is issued a proclamation to block China’s use of graduate students to steal intellectual property and technology from the U.S.

“Today I will issue a proclamation to better secure our nation’s vital university research and to suspend the entry of certain foreign nationals from China who we have identified as potential security risks. I am also taking action to protect the integrity of America's financial system - by far the best in the world,” the president said.

“I am instructing my presidential working group on financial markets to study the differing practices of Chinese companies listed on the U.S. financial markets with the goal of protecting American investors. Investment firms should not be subjecting their clients to the hidden and undue risks associated with financing Chinese companies that do not play by the same rules. Americans are entitled to fairness and transparency,” he added.