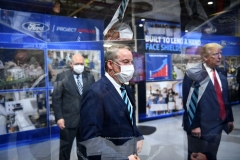 (CNSNews.com) - When touring a Ford plant in Ypsilanti, Mich., President Donald Trump said Thursday that he wore a mask in the back but took it off before going before reporters, because he didn’t want to give them the pleasure of seeing him wearing one.

“Mr. President, there was a lot of interest about whether or not you would end up wearing a mask today. Can you take us to your thought process of where you decided not to?” a reporter asked.

“I did wear-- I had one on before. I wore one in this back area, but I didn’t want to give the press the pleasure of seeing it. I had it in the back area. I did put a mask on,” the president said, adding that he wore goggles too.

“What about the example he would set for other Americans? a reporter asked.

“I think it sets an example both ways, and as they say, I did have it on,” Trump said.