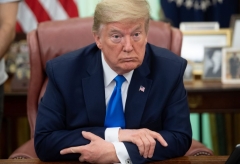 (CNSNews.com) - Former Vice President Joe Biden can’t say he knew nothing about the unmasking of Trump’s former national security adviser Michael Flynn if he was one of the unmaskers,  President Donald Trump said Wednesday.

“The unmasking is a massive thing,” Trump said during a cabinet meeting with the governors of Colorado and North Dakota. “Who can believe a thing like this? I watched Biden yesterday on ‘Good Morning America’ being interviewed by one of your colleagues, George Stephanopoulos, and he said he knew nothing about anything. He has no idea.

“He knows nothing about anything, nothing at all, and then it gets released today that he was a big unmasker. So how do you know nothing if you are one of the unmaskers? It is one of the very big stories, and I suspect you'll have, if it’s possible, even bigger stories coming out,” the president said.

When asked on Tuesday what he knew about the moves to investigate Flynn and whether there was anything improper done, Biden said, “I know nothing about those moves to investigate Michael Flynn, number one. Number two, this is all about diversion. This is a game this guy plays all the time. The country is in crisis.

“We're in an economic crisis, health crisis, in real trouble. He should stop trying to divert attention from the real concerns of the American people,” Biden said.

“I do want to press you that. You say you didn't know anything about it but you were reported to be at a January 5th, 2017 meeting where you and the president were briefed on the plan to question Michael Flynn over those conversations he had with the Russian ambassador Kislyak,” Stephanopolous said.

“No, I thought you asked me whether or not I had anything to do with him being prosecuted. I'm sorry. I was aware that there was -- that they asked for an investigation but that's all I know about it and I don't think anything else. Look, think about this,” Biden said.

When asked whether he believes  that U.S. District Judge Emmet Sullivan, the judge presiding over the Flynn case, should recuse himself or be disqualified or bias against Flynn, Trump said he asked Joint Chiefs of Staff Chairman Mark Milley whether he knew Flynn, and Milley praised Flynn.

“He thinks General Flynn is a great, great gentleman and a real fighter, and when I see what is happening to him, it’s disgraceful, and it was all a ruse, and by the way, the FBI said he didn’t lie,” the president said.

“So with all this stuff I’m hearing about lying. The FBI said he didn't lie, but the sleeze bag said ‘well we don't care what they say. We’re saying he lied.’ The FBI you’ll remember when he left they said he didn't lie. What they’ve done to that man and that family is a disgrace. I tell you that because I left General Milley, he said a great man and a great soldier,” Trump said.

The president refused to talk about whether he plans to pardon Flynn.

“I won't talk about that, but he's going to be okay. He'll be just fine. I'm very, very saddened by what's happening to general Flynn and others. I want to tell you right now, and others,” he said.