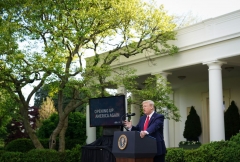 (CNSNews.com) - North Carolina Gov. Roy Cooper, a Democrat, has “within a week” to let President Donald Trump know whether he can guarantee full attendance at the Republican National Convention, which is scheduled for Charlotte, N.C., in August, or the president will entertain offers from other states willing to host the event.

Trump was asked during a White House Rose Garden press conference on protecting seniors with diabetes how long he was willing to give Cooper to provide him with the information that the RNC needs before decided to look for a venue in another state.

“If we would've lost it would've been the biggest story in political history, but we just won two races. It’s a very important place to me. I love North Carolina. In fact, my son, Eric, and Lara named their baby Carolina and it came from I think both, but she was born in North Carolina as you know, Lara, so it's a very important place to me, but at the same time, and I think the people understand this,” he said.

“We have a governor who doesn't want to open up the state and we have a date of August, the end of August. And we have to know before we spend millions and millions of dollars on an arena to make it magnificent for the convention, and we have tremendous people. I mean the economic development consequences are tremendous for the state,” Trump said.

“We have to know that when people come down, they're going to have the doors open. Now, if the governor can't tell us very soon, unfortunately, we’ll have no choice. This has nothing to do with us. This is between the governor and North Carolina, the people of North Carolina," the president said.

“The people want it, and we'll have to see whether or not the governor -- he's a Democrat at a lot of the Democrats, for political reasons, don't want to open up their states. So we will see if that works but I don't think it will. I would love to have it in North Carolina. That was why he chose it. Charlotte. We are going to see. We are going to see," Trump said.

“And at the end, we need a fast decision from the governor. He is going to have to. He's been acting very, very slowly and very suspiciously but we will find out," he added.

Meanwhile, the governors of Florida and Georgia have offered to host the convention in their states.