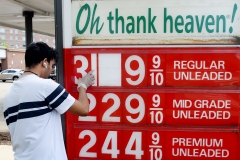 An employee of a gas station adjusts gasoline pump prices as they continue to fall with the oil market in turmoil on April 21, 2020, in Arlington, Virginia. (Photo by OLIVIER DOULIERY/AFP via Getty Images)

(CNSNews.com) – Gas prices are going up “at a far more rapid rate than anyone’s seen in a long time,” former President Donald Trump said Tuesday, predicting a $1 to $3 increase, which he said is bigger than a tax increase.

In an interview with “Fox News Primetime,” Trump pointed out that the economy “was recovering” under his administration twice.

“We got it to a level that the world has never seen before. We were the envy of the world, and then when we got hit by the - as I call it - the China virus, COVID. It was, it obviously went down along with every economy, and then we were the first to get it back up, and we actually, the stock market, when I left was higher, slightly higher than it was even at the prime prior to COVID,” he said.

“So, it was incredible what we were able to do. If you look at the jobs numbers, we had the all-time highest number of jobs. We had 162 million people working. We were never close to that. Everything we had, African-American, Asian-American, Hispanic-American. Everybody was setting records - women. It didn't matter,” the former president said.

“We had gas prices very low, and yet we had more energy jobs than we’ve ever had, but you know when you see gas prices going up, and they’ll be going up by $1, $2, $3, if you look at that, and it's bigger than a tax increase. To the consumer, you get a dollar increase in gasoline, that’s bigger than a tax hike, than a big tax hike,” Trump said.

“So, it's a terrible thing that is happening, and let's talk about tax hikes. They’ll be raising taxes at the highest number that we’ve ever seen. It will be the biggest tax increase in history of our country to pay for everything, and it is a very devastating thing. It’s a very sad thing to watch,” the former president said.

“Fortunately, in my administration and through what I did frankly and others, but what I did with the FDA is I forced them to move quickly, and we got the vaccine done in nine months instead of 5 years,” he said.

“I don't think it would have ever been done frankly, because according to their rules and regulations, they would have never had it, but we got a vaccine done in nine months. Fortunately, that’s not only going to save our country. It's going to save the world,” Trump said.