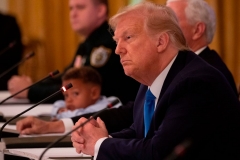 President Donald Trump participates in a roundtable with stakeholders positively impacted by law enforcement, in the East Room of the White House in Washington, DC, on July 13, 2020. (Photo by JIM WATSON/AFP via Getty Images)

(CNSNews.com) - “Far left mayors are escalating the anti-cop crusade, and violent crime is spiraling in their cities,” President Donald Trump said Monday at a White House roundtable with stakeholders who have been positively impacted by law enforcement.

“Our officers have been under vicious assault, and hundreds of police have been injured and several murdered. You've been reading about it just like I've been seeing it. Reckless politicians have defamed our law enforcement heroes as ‘the enemy. They call them ‘the enemy.’ They actually go and say they’re the enemy, and even call them ‘an invading army,’” he said.

“These radical politicians want to defund and abolish the police from our nation.  At first -- when I first heard it, I said, ‘Well, that's just something that they're saying. That doesn't…,’ but they actually are trying to do it. You look at what's going on in Minneapolis, you look at what's going in many, many Democrat-run areas, but they want to defund, and they want to abolish,” Trump said.

“Far-left mayors are escalating the anti-cop crusade, and violent crime is spiraling in their cities.  It's all far-left cities where they have no understanding of what has to be done. They don't have a clue, and I will say that we put on a very powerful rule and law that you get 10 years if you knock down a monument.  If it's a federal monument, you go to jail for 10 years,” he said.

The president said that no one and nothing has been attacked since he signed the executive order making it punishable by 10 years to attack a federal monument. However, as CNSNews.com reported, statues of the Virgin Mary were vandalized recently in Boston and in Florida.

“If you do anything where it's a federal monument -- and there are a lot of them up there -- and nobody has been attacked, nothing has been attacked since we did 10 years in jail, monument or statue,” he said.

Trump noted the recent spate of violence in that has plagued Democrat-run cities.

“In one recent week in New York City -- this is hard to believe -- shootings were up 358 percent, and yet they spend all their time -- they want to do Black Lives latter [sic] -- Matter signs outside of Trump Tower. They ought to spend their time doing something else, because I'll tell you what: 358 percent increase in shootings in New York,” he said.

“Last month, over 300 people were shot. NYPD retirements have quadrupled, and they're going up even further, and New York City is out of control, unfortunately. My place, I love it, but it's out of control. It was doing so well,” the president said.

He said former New York City Mayor Rudy Giuliani did a great job and was “the greatest mayor in the history of New York.”

“Murders in Atlanta are up 133 percent compared to the same period last year, and one of the victims was an 8-year-old girl, and we've had younger than that in Chicago last weekend. In the last two weeks, 105 Americans were shot in Philadelphia. In Minneapolis, the city voted to disband the police department and cut it way down, but disband it ultimately,” Trump said.

“The radical politicians are waging war on innocent Americans. That's what you're doing when you play with the police. My administration is pro-safety, pro-police, and anti-crime, and I will say -- I just see a new number came in from Chicago -- this weekend was a scourge. This weekend was -- I guess 20 people killed in many, many shootings -- many, many shootings, far worse than the last week,” he said.

“So things are happening that nobody has ever seen happening, happen in cities that are liberally run. I call them ‘radical lib,’ and yet, they'll go and march on areas and rip everything down in front of them,” the president said.

“If that's what you want for a country, you probably have to vote for Sleepy Joe Biden, because he doesn't know what's happening, but you're not going to have it with me. So we've been very strong on law enforcement. We'll be doing things that you'll be, I think, very impressed with. Numbers are going to be coming down even if we have to go in and take over cities, because we can't let that happen,” Trump said.

He said that the homicide rate in Chicago is worse than Afghanistan or any war zone that the United States is involved in.

“When you have 20 people killed, 22 people killed in one weekend in Chicago, and you have 88 shootings -- it's not even conceivable. That's worse than Afghanistan. I hate to say it: That's worse than any war zone that we're in, by a lot. It makes them look like tame places by comparison. So we're not going to let it go on,” Trump said.

“We've done a great job in Portland. Portland was totally out of control, and they went in and, I guess, we have many people right now in jail, and we very much quelled it, and if it starts again, we'll quell it again very easily. It's not hard to do if you know what you're doing,” he said.