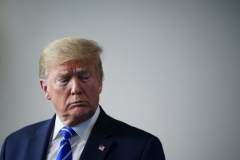 (CNSNews.com) - President Donald Trump said Friday that he was being sarcastic when asking about injecting disinfectant into the body to fight the coronavirus.

The president was asked to clarify his comments during a White House ceremony to sign the $484 billion coronavirus relief bill.

“I was asking the question sarcastically to reporters like you, just to see what would happen. Now disinfectant, where doing this (rubs hands) maybe on the hands would work, and I was asking the question of the gentleman who was there yesterday, Bill, because, when they say something will last three or four hours or six hours, but if the sun is out or if they use disinfectant, it goes away in less than a minute. Did you hear about this yesterday?” he said.

At Thursday’s briefing with the White House Coronavirus Task Force, the president invited Bill Bryan, who leads the science and technology directorate at the Department of Homeland Security, to speak about his team’s findings after studying the effects of certain elements on the coronavirus.

“You were asking your medical experts to look into it. Were you being sarcastic with them?” a reporter asked.

As CNSNews.com previously reported, Trump asked Bryan about hitting the body with ultraviolet light or injecting something like a disinfectant to fight COVID-19 at Thursday’s briefing:

So supposing we hit the body with a tremendous -- whether it's ultraviolet or just very powerful light, and I think you said that hasn't been checked, but you are going to test it. And then I said, supposing you brought the light inside the body, which you can do either through the skin or in some other way. And I think you said you were going to test that too. It sounds interesting.

Right. And then I see the disinfectant where it knocks it out in a minute, one minute. And is there a way we can do something like that by injection inside or almost a cleaning because you see it gets in the lungs and it does a tremendous number on the lungs so it would be interesting to check that. so that you are going to have to use medical doctors -- but it sounds interesting to me so we'll see but the whole concept of the light, the way it kills it in one minute, that's--that's pretty powerful.