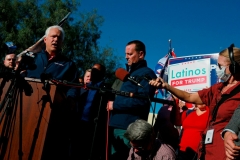 (CNSNews.com) – The Trump campaign officials announced Thursday that they are filing a legal challenge in Nevada upon receiving reports of “many irregularities.”

Campaign officials allege that there are non-residents who have voted and that ballots with the names of dead voters have been counted.
One voter, who was on hand, said she showed up to vote in person only to be told that someone had already cast a ballot in her name.

Nevada is a state which was declared too close to call as of Thursday afternoon. Democratic presidential nominee Joe Biden was leading with 49.4 percent of the vote to President Donald Trump’s 48.5 with 76 percent of the districts reporting.

Adam Laxalt, former Nevada attorney general, said, for example, there were people getting as many as 18 ballots sent to their homes.

“We knew these rolls were unclean, and we were told that signatures would save us from all fraud, but to date, we still have not been able to observe these signatures or meaningfully challenge a single mail-in ballot out of hundreds of thousands cast,” he said at a press conference in Las Vegas.

“We are also confident that there are thousands of people whose votes have been counted that have moved out of Clark County during the pandemic. Today we have a voter Jill Stokke who was denied access to vote. She showed up to vote, and she was told someone had already cast her ballot, and she was denied the opportunity to vote,” he said.

Laxalt announced that the campaign is filing in federal district court in las Vegas.

“We're asking for emergency relief of TRO and injunctive relief. We're asking the judge due to all of these irregularities to stop the counting of improper votes,” he said.

“Ballots are not automatically legal votes until they are checked. We are not being allowed to check. The Harry Reid machine recklessly threw ballots into the mail and now we cannot check whether or not there are non-residents, which we have evidence, publicly available evidence that you all in the media should be also looking at,” said former acting DNI Director Rick Grenell, who was in attendance.

“It’s publicly available information that non-residents have voted. There is a 30-day residency requirement in the state of Nevada. If you haven't been in the state for 30 days, it is illegal to vote. Reporters have a responsibility. The fact is we are filing this federal lawsuit to protect legal voters,” he said.

“We have to have a system where legal votes are cast. What the Harry Reid machine has done is throw out recklessly ballots, and now they don't want us to check those ballots, and we are seeing discrepancies all over. We are asking Clark county to give us answers,” he said.

"All of your questions about the details are legitimate questions, and they should be asked of Clark County, because the Clark County officials are silent. They are not giving us any answers, and they continue to count these illegal votes. Ballots versus legal votes. That's what we're talking about. It is unacceptable in this country,” Grenell said.

American Conservative Union Chair Matt Schlapp, who was also on hand at the press conference, said, “The presidency literally hangs in the balance.”

“What the fundamental principle is here is that we want to be able to make sure that the counting that occurs and that the results that happen can be respected by every American voter across this land and truly across the world,” he said.

“If you are not allowed in to see the process, both sides and all of you in the media, so that there is transparency. So that there is meaningful observing of these ballots, that calls into question what those results will be. The idea in this country -- the idea in America that we would somehow reduce or limit the ability to have basic insurance that a ballot is a legal ballot,” Schlapp said.