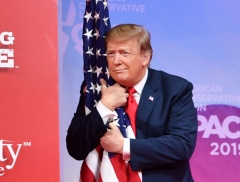 President Donald Trump hugs the US flag as he arrives to speak at the annual Conservative Political Action Conference (CPAC) in National Harbor, Maryland, on March 2, 2019. (Photo by NICHOLAS KAMM/AFP via Getty Images)

(CNSNews.com) - Sen. Pat Toomey (R-Pa.) said Sunday that President Donald Trump resigning is “the best path forward” to get him “in the rearview mirror for us,” and “the president did commit impeachable offenses.”

“Yes, I do. I think, at this point, with just a few days left, it's the best path forward, the best way to get this person in the rearview mirror for us. That could happen immediately. I'm not optimistic it will, but I do think that would be the best way forward,”  Toomey told CNN’s “State of the Union with Jake Tapper” when asked whether he thinks the president should resign.

As to whether Toomey thinks Trump should be impeached and he would vote to remove the president from office, the senator said, “I think the president did commit impeachable offenses. There's little doubt in my mind about that.

“I don't know, as a practical matter, that it is actually even possible to do an impeachment in the number -- in the handful of days that are left. It's likely that, if the House does pass articles of impeachment, we wouldn't get them until, I don't know, Tuesday or Wednesday,” Toomey said.

“We're literally less than one week to go at that point. I'm also not at all clear that it's constitutionally permissible to impeach someone after they have left office. So, there may not be a viable impeachment route at this point, but, certainly, he could resign, and that would be a very good outcome,” he added.

When asked whether Trump should face any consequences for inciting a mob to attack the Capitol, Toomey said, “Yes, he should, and that's part of the dilemma here. Impeachment does have the virtue of a politically accountable action that is taken when it's warranted. Unfortunately, the -- mechanically, that is certainly very problematic.

“Look, I think there's also a possibility that there's criminal liability here.  I'm not a lawyer. I'm not a prosecutor. So -- and I do know that the standard for a conviction in a criminal prosecution is quite high. So, I'm not sure whether that could be met, but there should be accountability. I will say, there is one very, very important form of accountability,” he said.

The senator said that Trump “has disqualified himself from ever certainly serving in office again.”

“I don't think he would -- is electable in any way, and I don't think he's going to be exercising anything like the kind of influence that he has had over the Republican Party going forward,” Toomey said.

Asked to clarify whether the senator is talking about possible criminal liability for Trump, Toomey said, “That's right. That's right. Like I said, I don't know whether he's met a standard that could actually be prosecuted and gain a conviction, but the behavior was outrageous, and there should be accountability."