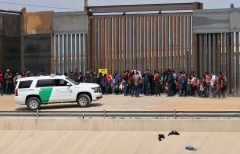 Central American migrants are detained by US Customs and Border Patrol agents at the border wall in Ciudad Juarez, Chihuahua state, Mexico, on May 7, 2019. (Photo by HERIKA MARTINEZ/AFP via Getty Images)

(CNSNews.com) - Texas Gov. Greg Abbott said Sunday that it's not just Republicans complaining about the Biden administration's handling of the U.S. border with Mexico, Democrat members of Congress, state and local officials are pushing back as well.

"What the president could do is to immediately put back in place the Remain in Mexico protocols that were established in the prior administration. He could continue to build the wall along the border in south Texas. He could send a stronger message that these people should not be coming here. Remember this, and that is one of the reasons why there are so my people coming here is if you go back to the Democrat presidential debates, every single one of the Democrat candidates said if they are elected, they will have open borders, and they will be giving things for free to anybody coming across the border," he said.

"They were doing exactly what they promised during the course of the campaign, and this is exactly why we are seeing the flood, and the Biden administration was simply unprepared to deal with the massive in flood that were coming in, which is why they have so haphazardly responded to it, and that's why we've seen the dire consequences for these kids, for the adults, and especially for the state of Texas, and it will only get worse, Chris," the governor said.

Abbott said that a government projection of more than 35,000 unaccompanied minors in federal custody by June is too low, and he expects that number to be "far higher."

The governor disputed an accusation from a non-profit group that provides legal services to immigrants that the only reason why he's acting like he cares about migrant children in Border Patrol facilities is for political reasons.

Wallace pointed out that there were thousands of complaints of sexual abuse at CBP detention facilities during the Trump administration, but he couldn't find one instance where Abbott complained and called it out when Trump was president.

"There are multiple differences between what happened in the Trump administration and what is happening now. First, the Trump administration remained in constant communication with me and with my office and let us know what was going on. Second, I saw reports about exactly what you're talking about and saw that those reports were filed with federal agencies," the governor said.

"The one that I talked about earlier this past week were reports that were filed with state agencies, the Texas Health and Human Services Commission and the Department of Protective and Child Services, which is basically child protective services, and so we had a duty to respond to any complaint about child sexual abuse in Texas as well as to investigate it, and that's exactly what I did to make sure it was addressed," Abbott said.

"Chris also, however, I must make clear that in addition to the complaints that we received, also the Bexar County sheriff's office - Bexar County is where San Antonio and that Freeman Coliseum is - they have already responded to at least three complaints of sexual abuse taking place there in San Antonio, but don't fall prey to Democrats and others saying, well Abbott didn't complain about this in the past," he said.

"What they need to focus on is exactly what I called attention to last month in Dallas, Texas, where I pointed out then that there were going to be instances of child sexual abuse taking place and today the Biden administration has done nothing to address these situations that would lead only to more allegations of child sexual abuse," the governor added.