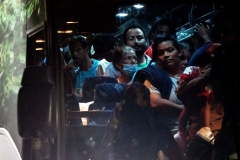 Migrants from Venezuela, who boarded a bus in Del Rio, Texas, disembark within view of the US Capitol in Washington, DC, on August 2, 2022.(Photo by STEFANI REYNOLDS/AFP via Getty Images)

“Listen, New York is a sanctuary city. Mayor Adams says they welcome in illegal immigrants, and now once they have to deal with the reality of it, they are suddenly folluxed, and they cannot handle it. They are now getting a taste of what we are having to deal with,” Abbott told Fox News’s “The Faulkner Focus” on Wednesday.

Mayor Adams threatened to send New Yorkers to Texas to campaign on behalf of Democratic gubernatorial candidate Beto O’Rourke because of the Texas governor’s decision to send busloads of migrants to his city. Abbott’s reaction? Bring it!

“I kind of feel like Clint Eastwood, go ahead, mayor, make my day. There could hardly be anything better to aid my campaign against Beto O'Rourke than to have Beto O’Rourke have his campaign aided by a bunch of New Yorkers. That will not be viewed positively in the state of Texas,” Abbott said.

“Candidly, the only thing better than that is what has already occurred, and that is Beto has received a million dollars from George Soros. This is a campaign by Beto that’s being run by people outside of the state of Texas. This race is about Texans, and Texans are fed up with what the Biden administration has done on our border, the chaos that it has caused, the damage that it’s caused in the state of Texas, and that is exactly why we're sending these illegal immigrants to places like Washington, D.C., and New York,” he said.

Abbott said that he’ll continue sending busloads of migrants to New York City and Washington, D.C., “because of what’s happening on our border.”

“The Border Patrol processes the paperwork for these illegal immigrants, and then they dump them off in Texas communities that are a tiny fraction the size of New York and Washington, D.C. We're talking about communities of about 25,000 people. They cannot handle the overwhelming number of illegal immigrants coming across the border,” Abbott said.

“One way of assisting them in dealing with this chaos in their own communities is by removing those illegal immigrants to Washington, D.C. or New York. I had to add to make sure that you and your audience knows, that is not our only strategy,” the governor said.

“We are using the National Guard to return back illegal immigrants who are trying to come across the border and the Texas Department of Public Safety is arresting illegal immigrants who do make it into the state of Texas and returning them to the border or arresting them for trespassing. So we have multiple strategies we're using. The busing to places like new York and D.C. Is just one of those strategies,” he said.

When asked what he makes of the pushback from the White House when the Democratic mayors ask for federal help to deal with the migrants, Abbott said, “I have think maybe the Biden administration does realize if you would the hypocrisy or duplicity.

“If they were to help New York and D.C., and not help the state of Texas, then he and their administration would really come under fire, but our goal is to for one, help our local communities and in doing so send even more buses to New York, to D.C., and maybe even to other communities to alleviate the challenge we're dealing with but also to continue to expose this national catastrophe caused by President Biden,” the governor said.

When asked why the Biden administration isn’t removing more criminals among the illegal immigrant population, Abbott said, “So the Biden administration's policy by not making those arrests and deporting these people is increasing crime in the United States, as well as it is fulfilling President Biden's promise during his campaign to have an open border policy. He has succeeded on that campaign promise, and Americans now see what chaos that has caused.”

As to what he would do if Mayor Adams sends busloads of New Yorkers to Texas to campaign against the governor, Abbott said, “We will explain to our fellow Texans that the Beto campaign is being aided by a whole bunch of New Yorkers in addition to George Soros. That will do nothing but hurt his campaign. Bring it.”