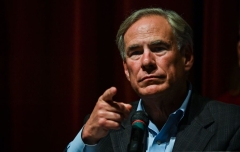 (CNSNews.com) - Texas Gov. Greg Abbott said Friday that President Biden’s plan to  expand the program that lets certain migrants apply for asylum via a cell phone app and get a decision on their asylum application before entering the U.S. won’t do anything to stop migrants from crossing the border illegally.

As CNSNews.com previously reported, Biden is requiring migrants from Cuba, Nicaragua, and Haiti to join Venezuelans in applying for asylum outside of the United States first via the CBP One app and if they’re approved, they will be allowed to enter the U.S.

Abbott predicted that Biden’s planned visit next week to the southern border won’t be more than a photo op.

“For one, it’s about time Joe Biden went down to the border to see the chaos that he himself created,” the governor told Fox News’ “America’s Newsroom.”

“It’s stunning it took him two years to do this and now he’s going to do probably nothing more than a photo op there, but when it comes to the plan that he was talking about yesterday, you saw no details whatsoever about what the Biden administration is going to do to stop people from coming across the border illegally,” Abbott said.

“Candidly, I think what his proposal is going to do is to entice even more people to come here illegally. Biden talked about the Republicans having no plan. Republicans do have a plan to secure the border. Biden has no plan to secure the border. Americans are angry and frustrated. It’s time for Biden to lay out details about how he will stop illegal immigration coming across our border,” he said.

According to Biden, migrants that don’t apply for asylum through the legal process won’t be eligible for the new parole program.

Abbott pointed out that Biden is not taking border enforcement “further than the Trump administration.”

“What Trump did was four very simple things” Title 42, the Remain in Mexico policy, and the catch and release, which Biden has not done, and then building the border wall, which Biden is not doing. Very importantly, I got to emphasize what Joe Biden is doing. He’s violating existing federal law through his catch and release program,” he said.

“He’s not enforcing laws that require them to detain people who’ve come across the border illegally, and he’s just letting them loose, and that is promoting and enticing more people to come to our country illegally,” Abbott said.

“I hope that Joe Biden goes down to the location where I have the National Guard that has cordoned off this area where people were entering into El Paso illegally so he can see firsthand exactly what the state of Texas is having to do because Joe Biden was not doing it,” the governor said.

Abbott took issue with DHS Secretary Alejandro Mayorkas’ claim that “Title 42 or not, the border is not open” and the administration will “continue to fully enforce our immigration laws in a safe, orderly, and humane manner.”

“I gotta go back and clarify what Mayorkas was saying, because he knows he is lying to Americans, and Americans know that he is lying, because under Joe Biden just in the past year alone, we've had a record number of people cross the border illegally. That border is open because of the Biden administration,” the governor said.

“We’ve had about as many people cross the border illegally in the past year alone as we have residents of Houston, Texas. This is outrageous that Joe Biden is not doing more. They’re not fooling anybody, and there’s a reason why he’s trying to step up now. That’s because most Americans disagree with Joe Biden's open border policies and lay the fault directly at Joe Biden's feet,” he said.

Abbott predicted that within two years, the United States will be in a “much stronger position.”

“I know that the policies that the Republicans in the U.S. House have articulated about what they want to do to secure the border, and if the Republicans live up to what they are promising about border security as well as holding the Biden administration accountable, you’ll see multiple investigations,” he said.

“You will see funding packages not passed for the United States of America unless and until the Biden administration for one, starts funding border security and then starts enforcing the laws that already exist on the books,” the governor added.