Sen. Ted Cruz: What Obama Admin. Did Makes Everything Nixon Did Pale in Comparison 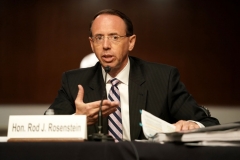 (CNSNews.com) – Former Deputy Assistant General Rod Rosenstein was either complicit in wrongdoing in signing off on the FISA applications that led to the surveillance and eventual unmasking of former National Security Adviser Gen. Michael Flynn or Rosenstein’s performance of his duties “was grossly negligent,” Sen. Ted Cruz (R-Texas) said Wednesday.

During the Senate Judiciary Committee hearing on oversight of the Crossfire Hurricane investigation, Cruz said that what the Obama administration did to the incoming Trump administration pales in comparison to everything former President Richard Nixon “even contemplated.”

The evidence that has been made public has made clear that the Obama administration targeted his political opponents, targeted President Trump and his campaign, unleashed, weaponized, and politicized the Department of Justice, the FBI and the intelligence community and that the decision-making to do so went right up to the very top.

We know that on January 4th, 2017, the FBI concluded in the document that has just been released that General Michael Flynn was ‘No longer a viable candidate to be part of this larger case.’ Their investigation did not yield any information on which to predicate further investigative efforts. The FBI is closing this investigation.
That was January 4th, 2017. The next day James Comey, the director of the FBI, is sitting in the Oval Office with Barack Obama, with Joe Biden, and James Comey – according to a memo from Susan Rice, one of the most remarkable CYA memos written in Washington, written on her last day in office and emailed to herself, saying by the way, this investigation into the national security adviser coming in to the new office, the president has said, do it ‘by the book.’ She says by the book three times.

James Comey tells the president we’re investigating Michael Flynn by the book. Well unless the book is Richard Nixon’s ‘Watergate,’ the day before the FBI said they were closing the investigation, and there’s James Comey telling Barack Obama, we’re going after General Flynn, a decorated three-star general, the incoming national security adviser to the president with Joe Biden sitting right there nodding along. Joe Biden himself personally unmasks Michael Flynn’s name.

Rosenstein admitted that he’d read most of Inspector General Michael Horowitz’s report, but he didn’t know when he read the FISA application that the primary source behind the Steele dossier had disavowed it and said it’s not true.

He said that when he arrived at his position at DOJ, he understood at the time that the primary issue Flynn was under investigation for was that he lied to Vice President Mike Pence and the FBI.

ROSENSTEIN: I‘ve read most of it. Yes, sir.

ROSENSTEIN: I have read that, yes sir.

CRUZ: You’re aware one of those is a lawyer fraudulently altering an email creating counterfeit evidence that became the predicate for a sworn statement in the FISA court.

ROSENSTEIN: That is in the inspector general's report. Yes sir.

CRUZ: Are you aware of other instances the Department of Justice employees fraudulently creating evidence to submit to court?

ROSENSTEIN: Every instance that I'm aware of Senator would be appropriately investigated, and hopefully appropriate action will be taken.

CRUZ: Mr. Rosenstein? On May 17th you appointed Bob Mueller the special counsel. On June 29 you signed the third application. On August 2nd, you signed the second scope application. You came into a profoundly politicized world, and yet all of this was allowed to go forward under your leadership. That unfortunately leads to only two possible conclusions - either that you were complicit in the wrongdoing, which I don't believe is the case, or that your performance of your duties was grossly negligent.

Was there any more important case that a Department of Justice had than an investigation into whether the president of the United States is a Russian asset colluding against the United States?

ROSENSTEIN:  Well that's the way you are characterizing the investigation, senator. There were certainly lots of important investigations, but I viewed this as one of the most important.

CRUZ: At the time you reviewed it, did you know that there was significant exculpatory material that was omitted from it?

CRUZ: At the time you reviewed it did you know that a lawyer on your staff had fraudulently altered material as a basis for a FISA application?

ROSENSTEIN: And that lawyer was not on my staff, but I was not aware of it.

CRUZ: He was on the FBI staff.

CRUZ: And the FBI reports to the deputy attorney general.

CRUZ: At the time that you reviewed it, did you know the Steele dossier was paid for by the DNC?

ROSENSTEIN: I don’t believe so.

CRUZ: Did you ask any of those questions?

ROSENSTEIN: The questions I would have asked, senator, would have been is the information represented to me verified, and I would anticipate, Senator, that if somebody knew that it wasn't or that there was some issue about the credibility, informant or the accuracy of the evidence--

CRUZ: Mr. Rosenstein when you are going into the department that has been politicized I understand it's easier just not to rock the boat or not to question the people there, but you were the acting attorney general of the United States and had a responsibility not to allow political targeting. Let me ask you, did it strike you as strange, and my time is expired, so I’m going to leave this as the last question?

Did it strike you as strange that the FBI and the Department of Justice was going after a three-star general, the incoming national security advisor to the president, who they already said they were going to dismiss the case against, and the predicate for all of this is the Logan Act, which you know perfectly well is an unconstitutional law that no one has ever been prosecuted under in the history of the Department of Justice and should have been laughed out of the room.

In any responsible Department of Justice if someone had suggested we’re going to go after the incoming national security advisor for violating the Logan Act, which says an American citizen can't talk to a foreign leader, I guarantee you today, right now John Kerry is violating the Logan Act. Now fortunately, It's an unconstitutional law, so who cares? Why did you not laugh this out of the room, and why didn’t you get to answers on this? Why did you let this pile of partisan lies consume the country for two years?

ROSENSTEIN: Senator, I appreciate you pack a lot into your question. I know the time is limited. First of all, Senator, I think it's not accurate to say that we didn't rock the boat. As you may be aware, when I went into that job with Attorney General Sessions, we actually made a lot of significant changes. It wasn't just about the Russian investigation. There was a lot more going on in the Department of Justice, and so I would not have been reluctant in any way to rock the boat if I believed that there was something improper was going on.

With regard to General Flynn, to take that particular issue, Senator, my understanding at the time that I arrived was that General Flynn had lied to the vice president and to FBI agents, and that I believe was the primary issue that was under investigation at the time. I didn't know all the background that appears in the pleading that was filed by the U.S. Attorney in D.C.

CRUZ: But you didn't bother to ask. You didn't actually bother to drill in and say, show me the background. You know this might be the most important case we've got in the whole country. Let me actually do more than just rubber-stamp the document put in front of me?

ROSENSTEIN: I don’t believe I was rubber stamping senator, and I fully appreciate your concern, and obviously, you always wished you could have done more, but we still have 70,000 cases filed that year. I devoted more attention to this case than to anything else, but I still didn't know everything, and so that’s the best I can give you, Senator.