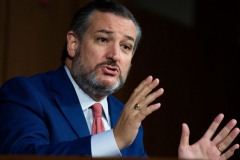 (CNSNews.com) – Sen. Ted Cruz (R-Texas) said Tuesday that he introduced legislation that would hire hundreds more immigration judges to immediately adjudicate asylum claims and would result in keeping families together but eliminate catch and release.

As it stands now, because of the Flores Agreement, unaccompanied minors can’t be held by CBP for longer than 30 days, and they have to find a family member or U.S. sponsor to take care of them.

When asked whether there’s something in the law that can be changed, Cruz told Fox News’ “America’s Newsroom, “There absolutely is something in the law that can change. I introduced legislation that would expedite review for people who came here that would keep families together, so you wouldn’t separate families, but it wouldn’t do catch and release. It wouldn’t release them.

“Instead, it would provide for 500 new immigration judges who would immediately adjudicate asylum claims. That’s the way the rule of law was meant to work, and even more fundamentally, we know how to solve this problem, which was the Remain in Mexico agreement. That’s what President Trump negotiated with the government of Mexico,” he said.

“Last year, we had the lowest rate of illegal immigrants in 45 years. It worked. Joe Biden and Kamala Harris ripped it to shreds, and they produced this disaster. I gotta say you see rich Democrats basically saying to Texas and the rest of the country, ‘Oh, you silly people. You shouldn’t worry about that,’ and they’re saying this while they’re at their fancy enclaves, while they’re wining and dining,” the senator said.

“I’ve introduced legislation today in the Senate. It’s called Stop the Surge, and it creates new ports of entry for these 2 million illegal immigrants. So instead of having 15,000 Haitians under a bridge in Del Rio, Texas - Del Rio just has 35,000 people, its population - that's half the city coming in one day in Del Rio,” he said.

Cruz explained that his bill “designates new ports of entry” in cities across America.

“So rich Democrats can be sitting there and suddenly see 10, 20, 30, 50,000 illegal immigrants like we’re seeing in Texas on a daily basis. I can just envision them in Nantucket, sipping a martini, going, ‘Oh goodness. They want to come to our clubs.’ They would be horrified, but they need to face the disaster of their policies and the humanitarian misery they’re causing,” the senator said.

Host Bill Hemmer pointed out that the New York Post is reporting that 2,000 unaccompanied minor children were flown from Texas to New York since August, and the flights are landing “in the dead of the night.”

Cruz said that the Biden administration’s “entire political strategy is based on secrecy.”

“What is happening at our southern border is an absolute tragedy. We’ve had over 1.3 million people cross illegally. We are on the path to have over 2 million people cross. Joe Biden and Kamala Harris caused this, and their entire strategy is ignore it, and they’re counting on the corrupt corporate media to ignore it,” the senator said.

“Of course they fly in the middle of the night because they have no defense. Every Democrat who for four years said, kids in cages, kids in cages, the Biden cages are bigger, and they’re more full than we have ever had in this country, and not a single Democrat cares. It is an absolute disaster, and I gotta tell you. My home state of Texas is bearing the brunt of this catastrophe that is unfolding because of political decisions made by Joe Biden and made by Kamala Harris,” he said.

Hemmer pointed out that Cruz has said that if Democrats in Washington had to endure what the people in south Texas did as far as illegal immigration, the laws would be enforced, the walls would be built, and Remain in Mexico would be implemented.

Cruz predicted that the Democrats will not pass his legislation, “because they’re perfectly happy being hypocrites.”

“These are the same people Nancy Pelosi when she does fundraisers with rich Democrats, they don't wear masks. They make the serving staff wear masks, and that's really how they treat much of America, like their serving staff. Joe Biden needs to come to the southern border and see it firsthand. Kamala Harris, our border czar, come to the Rio Grande Valley,” he said.

“A few weeks ago, I did roundtables in south Texas with ranchers and farmers and law enforcement and elected officials. Virtually all of the elected officials in south Texas are Democrat. Historically, it’s been a Democratic part of the state. Almost to a person, the elected Democrats looked at me and said, ‘Listen, if my party is for open borders, I can't be with them,’” Cruz said.

“Nobody can defend this disaster if they see it, which goes back to your opening question, Bill. Why do it in the middle of the night? Because they can't defend it, and their only strategy is hide it from the American people,” the senator added.