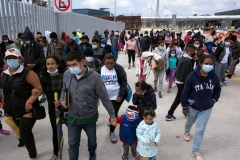 Migrants and asylum seekers awl after a demonstration at the San Ysidro crossing port asking US authorities to allow them to start their migration process in Tijuana, Baja California state, Mexico on March 23, 2021. (Photo by GUILLERMO ARIAS/AFP via Getty Images)

(CNSNews.com) – The Biden administration is releasing illegal immigrants into the U.S., and they’re testing positive for COVID at a rate over six times higher than the U.S. population, Sen. Ted Cruz (R-Texas) said on Wednesday.

“What is happening is truly tragic. Even Biden's DHS secretary admitted we're seeing the highest volume of illegal immigration across the southwest border in 20 years. Just last month in February, there were over 100,000 illegal aliens. They’ve got over 15,000 children held in cages right now, and all of this is the direct result of the political decisions made by Joe Biden and his administration,” he said.

“When Joe Biden became president, he halted construction of the border wall. He reinstituted the failed policy of catch and release, and he ended the Remain in Mexico policy, and that has resulted in this crisis. They're releasing illegal immigrants, and these illegal immigrants are testing positive for COVID-19 at over six times higher rate than the U.S. population,” the senator said.

When asked what he thinks of the decision, Cruz said, “When she was asked this week if she was going to the border, she started laughing, and sadly, that seems to be the attitude of the Biden administration. I’ll tell you tomorrow on our trip to the border, we want to bring reporters with us. We wanted Fox News wanted to embed with us.  ABC wanted to embed with us. We had a lot of reporters who wanted to go. The Biden administration instituted an unprecedented media blackout.

“They won't allow reporters in. They won’t allow cameras in. They won’t allow pictures, and the reason is obvious. Democrats spent four years attacking Donald Trump for kids in cages. Obama built the cages, and under Joe Biden the cages are bigger, and they’re much more full, and they don't want anyone to see it, and it is unacceptable. Every other administration in recent years has allowed the press to go there, and it is wrong. I am fighting for the media to have access to the facilities,” he said.