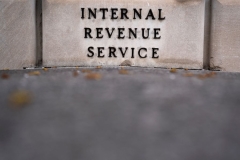 The Internal Revenue Service building is seen in Washington, DC, on April 5, 2022. (Photo by STEFANI REYNOLDS/AFP via Getty Images)

(CNSNews.com) – Sen. Ted Cruz (R-Texas) warned Sunday that the Democrats through the Inflation Reduction Act are trying to hire 87,000 new IRS agents, which will double the size of the IRS making it bigger than the Pentagon, State Department, FBI and Border Patrol combined.

Prior to the vote on Sunday, Cruz told Fox News’s “Sunday Morning Futures” that “the Democrats are on the verge of ramming through what really is a terrible bill. This bill will hammer manufacturing. It will kill manufacturing jobs in this country. This bill will drive up gas prices. It has billions in new taxes on U.S. oil and gas production.

“We introduced amendments trying to take those new taxes out, so all the Democrats say they're worried and want to lower gas prices, they all just voted to raise gas taxes and to raise your price at the pump. This bill creates 87,000 new IRS agents. It doubles the size of the IRS. Those IRS agents are designed to come after you,” the senator said.

“This is a massive power grab, and I've got to say it's amazing, Maria, watching these Democrats amendment after amendment, common sense amendments they vote against. I introduced an amendment to say don't create 87,000 new IRS agents, every Democrat voted no,” Cruz said.

“I just introduced an amendment to say that Joe Biden and the federal government should not be able to sell oil from our Strategic Petroleum Reserve to the Chinese communists. Biden's sold over 2 million barrels of oil to the Chinese communists. Every Democrat but four voted no. They are bound and determined to try and ram this terrible bill through,” the senator added.

On the so-called “wrap-around amendment,” Cruz said that Democrats don’t need to force one through, because “they've kept party discipline where all of even the supposed moderates have been willing to vote against common sense bills. For example, as I said, every single Democrat, all of them voted to increase gas taxes.”

“So the next time you see a Mark Kelly in Arizona or Raphael Warnock in Georgia or a Maggie Hassan in New Hampshire or a Michael Bennett in Colorado or Catherine Cortez Masto in Nevada say, ‘Hey, we want gas prices to be lower,’ you know they are lying, because they stood up and voted raise the gas taxes, stick it to the producers, make our consumers pay more at the pump. That's the end result they want, and their voting record proves it,” he said.

Cruz called it “a flat out lie” that the bill taxes will not be raised on anyone making $400,000 or less.

“Well, it's a flat out lie. The Congressional Budget Office analyzed this bill, and it concluded a very large portion of it would be borne by people making under $400,000 a year with, that just about every group of taxpayers would see their taxes go up. The Democrats know this, and, by the way, we had amendments to say let's not have any of these taxes fall on people making under $400,000,” he said.

“The Democrats all voted no. They are lying, and you know what they're counting on? They're counting on the corporate media just carrying their water for them and saying, oh, your taxes are not going up. It's not the truth. They know it's not the truth, but they expect the corporate media not to tell people. So unless they're watching your show or a handful of others, they're not hearing what's actually in this terrible bill,” Cruz added.