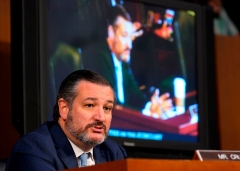 Senator Ted Cruz speaks during the Senate Judiciary Committee on the fourth day of hearings on Supreme Court nominee Amy Coney Barrett, on October 15, 2020, on Capitol Hill in Washington, DC.(Photo by SUSAN WALSH/POOL/AFP via Getty Images)

(CNSNews.com) – Big Tech’s decision to censor conservatives – and most recently, the New York Post over a story about Hunter Biden – is “the greatest threat to free speech” and democracy, Sen. Ted Cruz (R-Texas) told Fox Business on Thursday.

In an interview with “Mornings with Maria,” Cruz reacted to news from Director of National Intelligence (DNI) John Ratcliffe that Russia and Iran attempted to interfere in the presidential election.

As CNSNews.com reported, Ratcliffe said Wednesday that Iran spoofed emails claiming to be from the Proud Boys to try to intimidate voters into voting for President Donald Trump.

Cruz said there are “a couple ways” for a “hostile player” to interfere in an election, citing what Iran and Russia did, and the second way, he said, is what Twitter did to the New York Post.

One way to do it is what Russia and Iran apparently are doing here, which is creating false and fraudulent content and blasting to voters and having them believe it is real, that it’s serious and we need to be on our guard. Another way to interfere in the election is what Twitter and Facebook are doing right now, which is blocking legitimate news, censoring the news feeds so that they prevent voters from hearing information they don't want them to hear.

Last week, Twitter and Facebook crossed a really important threshold. We have had for several years, a growing problem, with Big Tech censorship, Big Tech censoring individual Americans’ conservatives’ views they didn't want, but last week was a major escalation because it’s the first time of which I am aware where big tech censored a major media outlook namely the New York Post.

The New York Post had two blockbuster stories last week alleging corruption concerning Joe Biden - one Ukraine, the other concerning Communist China, and both Twitter and Facebook decided voters were not allowed to see this story, so if you or I or if anybody tried to tweet the stories, tried to post the stories, you were blocked. You got a warning message that this story contains harmful material.

Now it wasn't malware. It wasn’t spyware. It was simply material that was harmful politically to Joe Biden, and they went even further. The New York post itself on its social media when it tried to send out their story, Twitter and Facebook blocked them and said, no, you can't send out that story.

I gotta say, Maria, it is chilling to see Big Tech oligarchs telling media companies – the New York Post has the fifth largest circulation of any newspaper in America. It’s 200 years old, and it was founded by Alexander Hamilton, and yet a handful of Silicon Valley billionaires are now telling media companies, they get to decide what stories you can write and what stories the Americans can read. That is chilling, and it’s wrong.

Host Maria Bartiromo noted that the Senate Judiciary Committee planned to subpoena Twitter CEO Jack Dorsey and Facebook CEO Mark Zuckerberg. She asked whether Cruz would vote to subpoena them.

Cruz said he would, adding that what Facebook and Twitter is doing is “outrageous” and “the greatest threat to free speech and to our democracy” in the United States.

Yeah, I am not just a ‘yes’ on this. I am a hell yes. I think what Big Tech is doing is outrageous. I think the greatest threat to free speech and to our democracy we have in our country. Last week, last Thursday, was when they blocked the second story, the story on Joe Biden being offered millions of dollars from Communist China, and it is important to note, the story is not just about Hunter Biden, Joe Biden's son.

These stories allege serious corruption by Joe Biden himself. I tried to tweet out both of the stories. I was actually sitting at the Judge Amy Coney Barrett confirmation hearing when I tried to tweet it out, and it blocked me right there.

That’s when I went over to Judiciary Committee Chairmen Lindsey Graham, and was very dismayed to see Big Tech just nakedly censoring the media, and so Lindsey and I went out and talked to the TV cameras right there, and we announced then that the judiciary committee was going to be voting this week to subpoena Jack Dorsey and Mark Zuckerberg - the CEOs of Twitter and Facebook - to explain what in the hell they are doing, because I think Big Tech CEOs are drunk on power right now, and it is not acceptable.

Cruz accused the mainstream media of “dereliction of duty, because they're not asking questions to Joe Biden.”

Joe Biden isn't answering it. The Democratic talking point that’s has been pushed out on this, is that this is Russian disinformation. Okay if you had evidence of that, actually put out the evidence. If the e-mails are fake, everyone wants to know if this isn't real that is very important to know and understand.

But, you know, Sherlock Holmes famously wrote about the dog that didn't bark. What is interesting and revealing here is what Joe Biden and his campaign isn't saying. The Biden campaign has not alleged this isn’t Hunter Biden's computer. They haven't disputed that it’s Hunter's computer. The Biden campaign has not alleged these emails aren't real. They have not said that at all.

They also haven’t alleged that Joe Biden didn't personally meet with the Ukraine oligarch who was paying Hunter Biden even though Joe Biden had repeatedly insisted publicly he did not. Also, the Biden campaign has not denied what you just read there, that the Chinese Communists offered Joe Biden personally millions of dollars for his bank account.

If it isn't true, let them deny it, but the problem is they are counting on docile media not to question it and simply to say, move on. The night the China story broke, Joe Biden did a town hall meeting hosted by ABC. They didn't bother to ask him. Tonight, I wager 20 bucks the NBC moderator isn’t going to ask about it. Trump might, but it’s not going to come from the moderator.

It is a dangerous threshold to say these American oligarchs in Silicon Valley now have monopoly power over what news is allowed to be reported and what you are allowed to hear. As you know, in my book, ‘One Vote Away,’ I talk about the threats to free speech the left is pushing, wanting to take away your rights, and my right to speak about politics. That is critically on the ballot November 3rd.