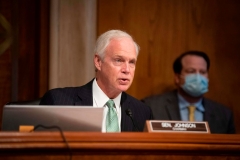 (CNSNews.com) - Sen. Ron Johnson (R-Wis.) told CNN”s “State of the Union” on Sunday that peaceful protests that don’t lead to rioting can also end up as a siege on cities.

Johnson was asked whether he was comfortable with President Donald Trump appearing to inflame tensions in Portland, by painting protesters as thugs and cities in chaos and by calling on Portland Mayor Ted Wheeler to resign and be arrested.

“Listen, I have been urging calm across the board, particularly in light of what happened here in Kenosha, but, as I said in the opening statement, when we had acting Secretary Wolf before my committee, when you encourage disdain for the police, you encourage criminals. When you do little or nothing to stop rioting, you encourage anarchy,” the senator said.

In addition to gaining control of the situation and encouraging calm, Johnson said, “We need to figure out what we do all agree on, and we share the same goal. We all want a safe, prosperous and secure America in states and communities. Let's concentrate on those areas of agreement, because that's how we achieve the unity everybody says they want,” Johnson added.

CNN’s Dana Bash said that judging by his Twitter feed, Trump appears to be “agitating and actively encouraging his supporters to go into Portland, which is resulting in some of this violence.”

When asked whether that’s what he wants to see from the president, Johnson said, “But, Dana, there are people -- there are people agitating all over the place, and what we need to do is get control of the situation.”

He said Kenosha, Wis., where protests led to violence in the wake of the shooting of Jacob Blake, can be a model for that.

“What happened in Kenosha is, Congressman Steil got into the city really quick, found out that law enforcement were looking for help. He called up the president. The president responded immediately and said, what can I do to help? And he offered to bring in some out-of-state National Guardsmen,” Johnson said.

“And, unfortunately, our governor turned it down one night. Two people died in the intervening time. Then he accepted it,” the senator said.

He said that “we need to encourage an end to the violence and the rioting.”

“The way you stop the violence, the way you stop the rioting is, you surge manpower and resources, citizen soldiers, National Guard, and you overwhelm the numbers of rioters, so that they can't riot, so that you can protect people's First Amendment constitutional right to peacefully protest and that they don't turn to riots,” Johnson said.