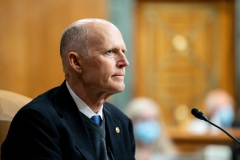 Senator Rick Scott, R-FL speaks as Neera Tanden, nominee for Director of the Office of Management and Budget (OMB), testifies during a Senate Committee on the Budget hearing on Capitol Hill in Washington, DC on February 10, 2021. (Photo by ANNA MONEYMAKER/POOL/AFP via Getty Images)

(CNSNews.com) – President Joe Biden talks a nice game about unity, but for him, unity means Republicans must agree to “spend and spend and spend,” Sen. Rick Scott (R-Fla.) told “CBS This Morning” on Thursday.

When asked how Biden can work together with Republicans on his $2 trillion infrastructure plan, which he laid out Wednesday night in his speech before a joint session of Congress, Scott said, “Well, I was at the speech last night, and you know, the president gives a nice talk about unity, but then he doesn't -- there's no unity. Unity for him is Republicans just agree to spend and spend and spend.

“Take his so-called infrastructure bill. It has very little to do with infrastructure. Less than 10% has anything to do with roads, bridges, airports and seaports. He is proposing spending money – I mean it’s unbelievable, the trillions and trillions and trillions. It’s like he's going to pay for everything. He doesn't want to talk about how it's going to get paid for,” the senator said.

“I mean, what I was surprised when he talked about the minimum wage, it wasn't a million bucks. I mean, give everybody a million dollars a year, guarantee everybody will be rich. I mean, this is -- he is spending us into oblivion, into -- bankruptcy, bankrupting this country. We're going to be soon at $30 trillion worth of debt,” he said.

When asked why Republicans can’t try to cut a deal on infrastructure, the senator said, “It would be nice if it was about roads, bridges, airports, and seaports. There's clearly something Republicans want to do, but what -- it's nice -- if I say I'm going to give you everything for free, I mean, sure, that's pretty popular.

“If I say, now, I'm going to give it to you for free, but this is what it's going to cost you, and by the way, Washington is going to make all the decisions in the future for everything. I mean, that's not going to be very popular. So he doesn't tell the whole story,” Scott said.

“His whole story is, I'm going to give you, I'm going to give you. That's all he's done. Look at the COVID bill - had less than 10% had anything to do with COVID, gave money to people in prison. Why would we -- this doesn't work. What you've got to do to grow the economy is do what I did in Florida -- reduce taxes, reduce regulation, reduce permitting, grow your economy. First thing he talks about is jobs, but he kills 10,000 jobs with the Keystone Pipeline,” he said.

When asked whether he sees this as an investment in America like the Democrats say it is, the senator said, “Well, I -- look, I want to invest. I mean, I'm a business guy. I invested all the time. What you invest is to grow the future. You don't invest to tax the living daylights out of people and not be honest with them.”

Host Anthony Mason pointed out that Democrats are proposing a tax on the wealthiest Americans. “That’s less than two percent of the population,” he said.

“Behind the scenes they're talking about all these taxes. Actually they're talking about inflation, but he didn't talk about that last night. The Biden administration is scared to death of what’s happened with inflation, with gas prices and food prices and household goods. They're not -- be honest with the American public of where we are. I mean, you can't just keep spending money with no accountability,” the senator said.

On the cruise ship industry, Mason pointed out that according to the USA Today, the Centers for Disease Control and Prevention (CDC) is saying that cruises can start back up in mid-July if most passengers – 98 percent – are vaccinated.

When asked if he supports that, Scott said, “Absolutely. Give them -- we can go to hotels and amusement parks but can't get on a cruise line? The CDC has been missing in action for months, telling the cruise industry how to get started. I'm glad finally the CDC is making some decisions, hopefully working with the cruise industry.

“I'm not going to let up. It is unfair how the CDC has handled the cruise industry. It is completely unfair. That's a lot of American jobs,” the senator said.

The USA Today reports that the CDC will allow ships to “bypass the required simulated test voyages carrying volunteers and jump to sailings with paying passengers if 98% of crew and 95% of passengers are fully vaccinated.”

When asked if he supports those vaccination levels, Scott said, “You know, whatever they come up with, all right, let's give the cruise industry an -- at least give them a chance to open, so I'm fine with that.”