Sen. Rick Scott: ‘If Biden Wants to Actually Fix the Inflation Crisis He Created, He Should Resign’ 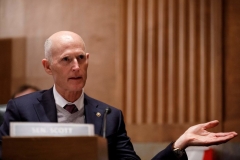 (CNSNews.com) - Sen. Rick Scott (R-Fla.) said Tuesday that President Joe Biden is unwell, unfit, incoherent, incapacitated and confused, and he’s “the problem” when it comes to the inflation crisis and should resign. 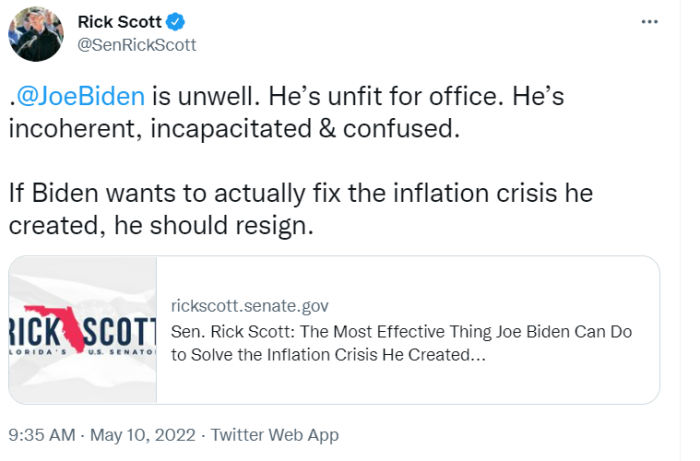 At the end of Biden’s speech on the economy Tuesday, CBS White House Correspondent Ed O’Keefe asked the president about Scott’s remarks, saying, “You called out Rick Scott a little while ago in your remarks.

“Earlier today, anticipating your remarks, he said, and I'm just quoting here that the best thing -- the most effective thing that Joe Biden can do to solve the inflation crisis he created is resign. ‘He's the problem.’ The senator added later, ‘Joe Biden is unwell, he's unfit for office. He's incoherent, incapacitated and confused.’ These are his words. Do you have a response?” O’Keefe asked.

In response, Biden said, “I think the man has a problem.”

Scott’s comments come in advance of the president’s remarks on the economy, in which Biden falsely claimed that Scott’s economic plan is “the congressional Republican plan,” and “it’s the Ultra-MAGA agenda.”

The president accused Republicans of wanting to solve inflation by raising taxes and lowering income.

Now, what’s the congressional Republican plan? They don’t want to solve inflation by lowering your costs. They want to solve it by raising your taxes and lowering your income. I happen to think it’s a good thing when American families have a little more money in their pockets at the end of the month, but Republicans in Congress don’t seem to think so.

Their plan has actually made working families — is going to make working families poorer. You don’t have to take my word for it. It’s in writing. They’ve made their intentions perfectly clear. Senator Rick Scott of Wisconsin [Florida], a member of the Senate Republican leadership, laid it all out in a plan. It’s the Ultra-MAGA Agenda.

Their plan is to raise taxes on 75 million American families, over 95 percent of whom make less than $100,000 a year, total income. The average tax increase would be about $1,500 per family. They’ve got it backwards, in my view. I’ve proposed a minimum tax for billionaires. In recent years, the average billionaire has paid about 8 percent in federal taxes.

Congressional Republicans have proposed increasing taxes on teachers and firefighters. Fifty-five percent of the largest corporations paid net zero in federal taxes in 2020 on $40 million [billion] profits. It just isn’t right. That’s why I’ve proposed a minimum tax for corporations.

Their plan would also raise taxes on 82 percent of small-business owners making less than $50,000 a year, but it would do nothing to help – to hold big big corporations and companies accountable. Think about it.

Republicans in Congress are so deeply committed to protecting big corporations and CEOs that they would rather see taxes on working American families and try to depress their wages to take on inflation. Never mind the fact that many of these companies are recording record profit margins, even as — as prices — as they raise prices records amounts.