Sen. Rick Scott: ‘I Don’t Know How Biden Ended Up with Classified Documents from His Time in the Senate’ 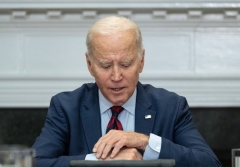 President Joe Biden speaks as he hosts Democratic Congressional leaders in the Roosevelt Room of the White House in Washington, DC, on January 24, 2023. (Photo by ANDREW CABALLERO-REYNOLDS/AFP via Getty Images)

(CNSNews.com) - Some of the classified documents found during a search of President Biden’s home in Wilmington, Del. were from his time as a senator, which was from 1973 to 2009, according to his attorney Bob Bauer.

Sen. Rick Scott (R-Fla.) questioned Tuesday how President Biden ended up with classified documents from his time as a senator.

Scott said that the Justice Department should leave no stone unturned in searching for classified documents from Biden.

“They ought to go look at it. They know there is a problem here, so they ought to go look at it. If I was Biden I would welcome them, and I would be transparent about it, and say look, I don't want to have classified documents outside a classified setting, and so he ought to say yes, I want you to come in. I want you to look and make sure there are none there and whatever I know I'm going to tell you. Be honest with the American people. I mean this is not that difficult,” he said.

Scott said that he believes that this will have political implications for Biden.

“I think the president needs to explain what he's done. I think Justice has to explain why did they raid Mar-a-Lago and why didn't they raid every place that Biden has ever been. This doesn't make any sense. They ought to be clear. There might be a legitimate reason, but tell us why they didn't do it and why they are treating this differently,” he said.