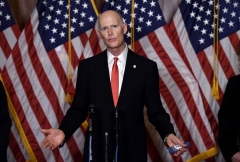 (CNSNews.com) - Sen. Rick Scott (R-Fla.) told Fox News’ “America’s Newsroom” on Thursday that he’s “very optimistic” about the Republicans chances of taking back the Senate in 2022, because they’ve made gains among suburban voters and Hispanic voters while Democrats are not even “talking to where Americans are.”

“If you look at the polls that we do at the National Republican Senatorial Committee, suburban voters have clearly come our way. Hispanic voters have clearly come our way, and you could see it in the Virginia race. I'm very optimistic that we’re gonna have a great November ‘22. We're going to take back the Senate, and we’re going to stop the radical left wing craziness that the Democrats are doing,” he said.

Scott said that the first states that Republicans should win in Georgia and Arizona, and they have a good opportunity to win Nevada, New Hampshire, Colorado, and Washington.

He said he disagrees with President Joe Biden that his Build Back Better plan will take care of issues like the price of gasoline because increased government spending causes inflation.

“Let's look at it. Gas prices are up 55% this year. Why would Joe Biden go out there and shut down pipelines and make it more difficult to produce oil and gas in this country? Think about what these guys are doing,” the senator said.

Scott said that Transportation Secretary Pete Buttigieg should travel to Long Beach, Calif., and “sit there” until cargo ships unload all the shipping containers.

“They don't do anything to solve these problems. There is nothing they are doing to solve any problem. How can he say that something’s going to get solved when they have no idea how to solve it? They're commentators,” the senator said.

When asked whether Virginia Gov.-elect Glenn Youngkin and former Virginia Gov. Terry McAuliffe were on the ballot or whether it was Biden and the progressive movement in Washington, Scott said, “I think it was both. I think first off, It’s hard to win when your party is sitting there and everybody says oh that party is going the wrong way. Then McAuliffe was clear.

“I think he was so clear the Democrats really don't believe parents should be involved in schools. That was an eye opener for parents. Parents believe these are their kids. These are our kids. We get to figure how we’re going to educate them. You don't get to decide how to educate and indoctrinate them. I think that was a big local issue, but that’s been going on all across the country, too,” he added.