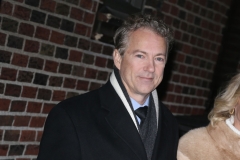 Senator Rand Paul R-KY departs after his taping of 'The Late Show With Stephen Colbert' at Ed Sullivan Theater on January 31, 2018 in New York City. (Photo by Karl Moor/Getty Images)

(CNSNews.com) – Sen. Rand Paul (R-Ky.) on Wednesday called out what he says is a double standard among those calling for President Donald Trump to be impeached for inciting the Capitol Hill riot.

As CNSNews.com reported, 45 Republican senators voted in favor of Paul’s bid to declare the House impeachment unconstitutional. Therefore, Paul said it will be “an uphill climb” for Trump to be convicted by the Senate.

“I think yesterday's vote in which 45 Republican members of the Senate voted that in their view proceeding with the impeachment trial of a former president is a strong end case that it will be an uphill climb for President Trump to be convicted and in any way sanctioned as a result of this,” the senator said in an interview with Fox News’s “The Story with Martha MacCallum.”

“It’ll just now be all theater, but it really is a double standard when you think about it. Kamala Harris has offered to pay people’s bail who tried to burn down the courthouse and were rioting in the cities. She offered to pay the bail. Is that inciting people to violence when you're willing to pay people to get out of jail after they committed violence? Should Kamala Harris be impeached? No, the answer is no,” he said.

“That incited one of his followers to almost kill Steve Scalise, wound four or five others and nearly have a massacre of 20 congressmen because he was incited by intemperate words of Democrats,” the senator said.

Paul said in contrast the Democrats did not condemn the violence from rioters in Portland.

“They've been calling it the summer of love so, yeah It's a double standard, but I'm not going to sit around and take it nicely and say oh, we need to really thoroughly examine the president's speech. I'll examine the president's speech when we can examine Kamala Harris’s comments on getting bail for people who are burning down cities,” Paul said.

The senator pushed back on MSNBC’s Joe Scarborough for saying Paul has forgotten he’s a conservative, and he wants people to forget about the Capitol Hill riots.

“If anybody has forgotten they're a conservative, it’s Joe Scarborough. I actually stood up and opposed the president's position on the Electoral College. I did vote to seat the electors. I thought their argument was wrong. I made that argument but the thing is, is Joe Scarborough is so unhinged now and so much a hater of all Republicans and things conservative that he doesn't even listen to the issues,” Paul said.

“I’ve made reasonable arguments against many of the president's positions on a series of very important issues. Scarborough has no clue because he's deranged and surrounded himself with sycophants, so he has no idea what's going on and calling names, but If he were fair-minded, he would look at some of the comments that Democrats made,” he said.

“When Cory Booker said, get up in their face. Is that not an incitement to violence? Maxine Waters, the mayor of Seattle saying it's the summer of love as they burn her city down. So no, they’re not fair-minded people. Not one time have we said that you should impeach Cory Booker or that you should impeach Kamala Harris or impeach Bernie Sanders because we're much more fair-minded people. I’ll let the public decide who is right on that,” the senator said.

He also criticized “The View” co-host Meghan McCain for saying she wants Trump to be impeached.

“I think we ought to look at the facts. Apparently, the violence happened while the president was giving the speech to other people. Apparently, people plotted about this violence weeks in advance on Facebook, which is the primary place that they plotted this. The other thing is, she needs to look at Democrats’ language and use the same standard. So if she wants to impeach the president, she should also impeach Maxine Waters, Bernie Sanders and Cory Booker,” Paul said.